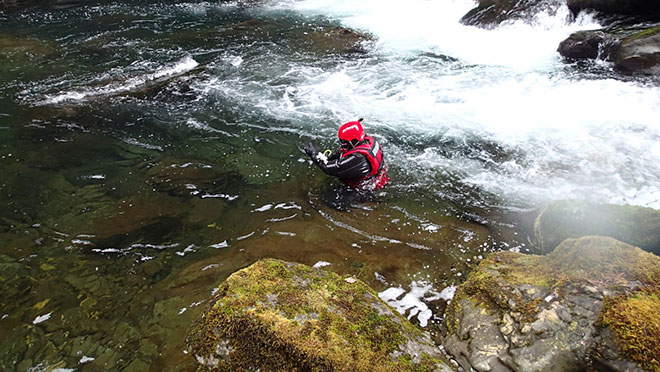 At our reservoirs, changes in water levels can affect the spawning cycles of certain species of fish. As well, changes in plant life and nutrient levels can have an impact on the food chain. Typically, the slower moving water found in reservoirs can trap nutrients important to fish survival. To mitigate this, BC Hydro has used fertilization programs to help maintain the production of fish food and sustain fish populations.

Dams can also alter the natural habitat of fish by stopping them from moving upstream to reach their spawning grounds. Fish moving downstream can be drawn through water intakes that also put their survival at risk. BC Hydro uses different methods to help fish safely bypass our installations. Fish ladders and screens have been built at certain facilities to allow fish to travel upstream or downstream of dams. Where water flows affect fish, we undertake downstream enhancement projects, such as placing gravel in riverbeds to avoid fish strandings, creating spawning areas and installing woody debris to help to improve fish habitat. The Upper Columbia White Sturgeon Recovery Initiative is just one example of a collaborative venture involving BC Hydro and other concerned groups working together to research and monitor the Columbia white sturgeon and protect its habitat.

Where vegetation near streams must be cleared to ensure the safety and reliability of power lines, fish living in these areas are impacted by the decrease in shade and cover which are important for their survival. Using a comprehensive vegetation management process, BC Hydro considers terrain, climate and soil stability to prescribe a method to clear vegetation effectively which will protect fish and their spawning, resting and hiding areas.

The Water Use Plans helped us take many of these fish and habitat concerns into account when deciding how to find a balance between competing uses of water that is environmentally, socially and economically acceptable to all British Columbians. BC Hydro also sponsors three fish and wildlife programs for the Columbia, Peace-Williston and Bridge Coastal watersheds.

The future of the white sturgeon

The Upper Columbia River population of white sturgeon — North America's oldest and largest freshwater fish — has been listed as endangered. Biologists are still doing research to understand why white sturgeon are in decline but we know that human activities — such as pollution, dam construction and fishing — are likely factors.

The Upper Columbia White Sturgeon Recovery Initiative is a collaborative venture involving BC Hydro and other concerned groups, including government, aboriginal, industrial and environmental organizations, stewardship groups and citizens. These interests are working together to research and monitor the white sturgeon.

BC Hydro is committed to learning about how its operations affect white sturgeon, as well as reducing impacts where they occur.

Working to save the white sturgeon

It will take many years to restore a naturally sustaining sturgeon population.However, regulations have been established which make commercial and recreational fishing illegal.

The Initiative is working to develop a long-term recovery plan that will incorporate conservation, hatchery work, water management options — which will be evaluated under the B.C. Water Use Planning process — and habitat restoration techniques.

The Hill Creek Hatchery in Nakusp has been modified to accommodate breeding and rearing of juvenile sturgeon for research and release into the Columbia River. Healthy juvenile white sturgeon will be tracked to assess what factors can help them survive in the wild.

How can you help?