Coquitlam School District's first step towards electrifying its fleet, is a Kia Soul EV. The Kia was purchased to replace an aging security and delivery vehicle that has traditionally logged about 65,000 km per year.

A slightly customized Kia Soul electric is in the first months of regular duty as a Coquitlam School District security vehicle. It's the district's small first step into what could be an eventual conversion of district vehicles to electric, and so far, it's been a hit.

"We have 84 schools in a 10 kilometre by 10 kilometre square, and the Kia does the job, even though it's not the top-end Soul EV for battery range," says the district's energy manager Adrian Pettyfer. "The guys are saying it's getting close to 300 km per charge, and that's more than enough."

The district removed the back seats out of the Soul to allow for more tool and equipment space. It will travel an estimated 65,000 km each year, and Pettyfer estimates that savings in fuel costs – particularly in these days with gas prices in the Lower Mainland hovering near $1.50 per litre – will see the vehicle pay for itself within two years.

With help from the CleanBC Go Electric Fleets rebates, the Coquitlam district replaced their existing security van with the Soul EV. Where the old vehicle used about 7,700 litres of gas a year for a GHG emissions total of more than 18,000 kg, the new one is charged with clean and renewable BC Hydro electricity. It can go from full to empty in seven hours plugged into one of the district's Level 2 chargers.

Pettyfer's message to other school districts?

"All I can say is that if your most used vehicle isn't an EV, you're missing out on big savings," he says. "The selling point isn't just environmental. It's payback. Don't forget this is a 65,000 km a year vehicle, so any organization that has a vehicle that does that many kms and has time to charge would be crazy not to go electric."

Pettyfer expects that Coquitlam will expand its electric vehicle fleet, but only when larger more spacious plug-in vehicles become available. That could be soon, as there's talk an electric version of the Ford Transit van – the E-Transit – could arrive in Canada by 2022. Like most electrics, the retail sticker price is considerably more than equivalent gas models. However, with the $9,000 combined incentives from federal and provincial programs, the savings in fuel and maintenance costs can make it a sensible investment.

District has 22 Level 2 chargers installed for staff and students

It's also early days for the Coquitlam School District's investment in 22 Level 2 chargers across the district. Installed with the help of rebates from the Clean BC workplace charger program, the chargers are popular in some locations and hardly used in others.

"We wanted people to feel comfortable purchasing an EV to get to work," says Pettyfer. "It's ideal for people who might live in a condo or who don't have access to 240-volt [for a Level 2 charger] in their home."

The district chose to go with the SWTCH smart EV charging platform, which allows for energy management, including usage tracking, load management, reporting and analytics. Asked what advice he might offer BC Hydro Alliance contractors in helping districts deliver EV charging, he said it's all about staying current.

"The only advice I can give to them is to learn the products and get a few installs under their belts," says Pettyfer. "With that experience, they can market themselves as EV installers."

B.C. school districts looking at charging and vehicles, including buses

BC Hydro key account manager Aron Garrecht says school districts including Burnaby and Surrey are starting to get serious about EV charging infrastructure and fleet conversions. And there's a movement towards electric buses, whose scheduling for schools can allow for timely charging.

The Nanaimo School District has recently got their first two electric buses and, according to Garrecht, have upgraded their electrical service to accommodate charging of up to 10 buses simultaneously.

"There's a program called the Go Electric School Bus Program (GOESB) which is sponsored by CleanBC through the Ministry of Energy, Mines, and Low Carbon Innovation. This program, managed by ASTSBC through the Ministry of Education offers some nice funding that can reduce the cost of an electric bus by a third," says Garrecht. "That, in tandem with lower fossil fuel and maintenance costs, helps bring the cost down to a little more than what a normal bus costs while significantly reducing fleet GHGs."

As a key account manager, Garrecht finds himself increasingly offering school districts information and advice on how to add electric vehicles, and where to access rebates. He says he can also help them through the application process with most programs.

"We can also help customers, through a preliminary capacity review figure out if they can add charging, and if so, to what extent without having to upgrade their service," he says. 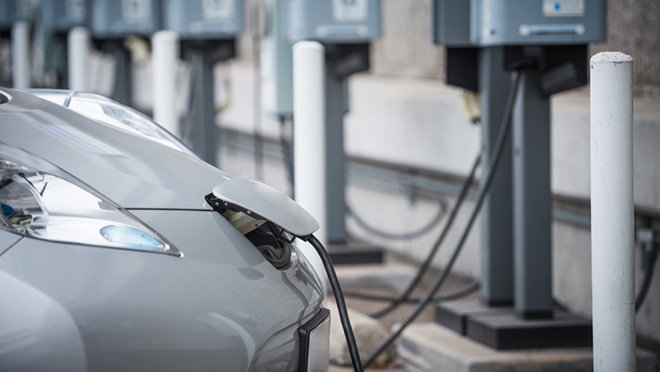 Rebates for EV fleet charging in B.C. have been increased for a limited time.