EN14 Strategies for Managing Species and Ecosystems at Risk

The Water Licence Requirements (WLR) Program is the umbrella program responsible for delivering the monitoring studies and physical works contained in the Section 88 orders issued by the Comptroller of Water Rights. To date, BC Hydro has received 22 of the 23 Orders and through the program's lifespan will implement a total of 339 studies and works, which will address issues related to various species of fish, wildlife, recreation, water quality, industrial operations, archaeology, dust debris management and erosion. The Bridge River Order was recently issued and studies will be initiated in fiscal 2012, while the Campbell River order is expected to be issued in the July of fiscal 2012. The Program, which extends over 20 years, is currently in the three year peak of implementation, with 61 per cent of the projects currently underway.

The results from the Columbia Rainbow Trout Spawning Surveys Study is considered one of the success stories from fiscal 2011. In 2010, the numbers of Rainbow Trout spawners and redds observed were the highest on record for the last 10 years. The stabilization of spring flows from Hugh Keenleyside Dam is thought to be a major contributing factor to this success.

In fiscal 2011, WLR also successfully constructed a new concrete boat ramp and parking area, at a cost of $1.1 million at Bush Harbour on the Kinbasket Reservoir. The new ramp is approximately one hour north of Golden and will provide recreational access down to 2,375 feet.

As defined in individual Water Use Plans (WUPs), a number of watersheds undertook Interim Reviews in fiscal 2011, with the focus on a technical review of the studies. The outcome of this review is to ensure the studies will provide the necessary information to answer the management questions posed during the WUP. A full review of every WUP is planned for each Watershed, with planning initiated in fiscal 2011 in preparation of these upcoming Reviews in future years.

In fiscal 2011 the WLR team met 94 per cent of its project delivery milestones. 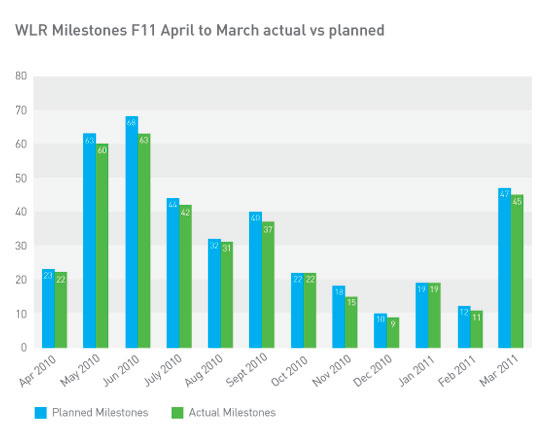 In partnership with the Province of BC Ministry of Environment, Fisheries and Oceans Canada, First Nations and community stakeholders, BC Hydro has established compensation programs to mitigate historic impacts on fish and wildlife resulting from the construction of our generation facilities. Each year, we work to develop a suite of projects that contribute to the delivery of our partnership's research, restoration and conservation goals. The current focus of the Fish and Wildlife Compensation Program is the completion of Basin Plans and Species and Ecosystem Action Plans in each of the three regions where we work. Our investment in projects, averaging $7.3 million on an annual basis, continues as we build a set of measurable objectives with our partners.

The Columbia chapter made investments of $4.86 million supporting 8 fish and 20 wildlife conservation and sustainable use projects in fiscal 2011.

The Coastal chapter of the Fish and Wildlife Conservation Program invested approximately $1.3 million in fiscal 2011 in 19 fish and 13 wildlife projects.

The Peace chapter invested $1.1 million in 25 projects, 13 fish and 12 wildlife research projects and compensation program delivery to protect and enhance fish and wildlife habitat, populations and resources during fiscal 2011.

Efforts include active involvement in recovery programs for species at risk, specific work site environmental management practices for various activities (which consider avoidance and mitigation for species at risk); acquisition of certain properties to conserve and recover biodiversity in sensitive areas; active involvement in organizations and partnerships such as the Canada Intermountain Join Venture, the B.C. Wetland Stewardship Partnership and; membership in federal species at risk policy and regulatory working groups of national industry associations.

BC Hydro is working on a company-wide strategy to minimize environmental, regulatory, legal and reputation consequences by laying out common steps for managing species and ecosystems at risk in a manner that demonstrates due diligence.