A bright future for a new cannabis venture

Back in February, we explored LED horticultural lighting and how to apply for our incentive, which can help customers significantly improve their payback when choosing a high quality, energy-efficient lighting option.

One of the hardest things to grow with LED lighting is cannabis. So, we were excited to talk to Williams Lake First Nation (WLFN) when they approached us for advice on setting up a facility for their new venture, Sugar Cane Cannabis. This is the first part of that story, and we'll be back in November to see how successful the first crop from their cutting-edge cultivation process has been.

Sugar Cane Cannabis: a first of its kind in B.C.

WLFN and the Province of B.C. entered into a first-of-its-kind agreement under section 119 of the Cannabis Control Licensing Act in September 2020, and the Nation's wholly-owned craft cannabis farm-gate cultivation enterprise, Sugar Cane Cannabis, was born.

"WLFN is excited to conclude this historic agreement with the Province of British Columbia," says WLFN Chief Willie Sellars. "We have expressed a desire to have a government-to-government arrangement around our participation in the cannabis industry for several years and it is gratifying to finally formalize this agreement. We're particularly excited about being the leaders in farm-gate cannabis sales. The WLFN craft cannabis farm-gate facility that is currently under construction will create jobs and stimulate tourism and represents a significant boost for the region's economy."

When the Nation began planning the project, it aspired to choose a lighting option that would create the smallest possible environmental footprint.

"This meant using LEDs over the traditional HPS alternative," explains Penny. "But the return on investment on LEDs is still a bit steep, so we reached out to BC Hydro for advice. They were very proactive, explained the process, and were ultimately essential in helping us find the right lights. Working with BC Hydro has been an amazing experience and we are very proud to be the first enterprise to navigate through the LED incentive program leading the way for others to make environmentally conscious decisions."

BC Hydro senior engineer David Rogers, a world expert in hydroponics, with international expertise in horticultural lighting, was keen to get involved. With emerging research and testing on greenhouse lighting technology for cannabis, BC Hydro wanted to ensure that WLFN was working with the right lighting technology for their product and growing experience.

"The original lights the Nation were considering were really good, but with LEDs being a relatively new application for cannabis grow operations, we understood that various lighting settings, such as spectrum, would affect the plants," says Rogers. "We made extra effort to work with WLFN and their lighting consultant to go over all of the leading research so that they could make an informed decision."

Finding the right balance of light for optimal results

Discussions and research into best practices led to Rogers writing detailed LED lighting specs for growing cannabis. "Because many smaller cannabis growers are cultivating their crops indoors under artificial light, one approach is to balance out the red light with blue and green light to essentially create a white light. It gets very technical, but as a high-level guide, for indoor cannabis lighting projects, we'd recommend LED lighting where the red light is less than or equal to 60% and the blue light is greater than or equal to 25%."

While it took a little time to define the specs and source the ideal product from lighting solution provider Signify, WLFN were keen to get it right. "BC Hydro was able to bring excellent technical expertise to our video calls, ultimately allowing us to make the correct moves," says Penny. "They facilitated an educated decision-making process, leading to the execution of our lighting plan, developed by Signify. This allowed our building contractor, Lauren Brothers, and our electrical contractor, MacKay Electric, to install a system that will enable us to cultivate a spectacular craft product."

"We're aiming for 650kg of dried cannabis per year, setting new standards for terpene and cannabinoid quality," says Penny. "These numbers aren't always reported with provincially regulated cannabis, but we're planning to report ours so people know exactly what they're buying. Our product is going to be very unique and there won't be anything else like it in BC."

We'll be back to find out all about Sugar Cane's first crop in the November edition of Current, exploring how the LED lights performed and what learnings will go into their next crop.

About the Williams Lake First Nation

Williams Lake First Nation, or the T'exelcemc (people of Williams Lake First Nation) have belonged to the Secwepemc Nation for over 6,500 years. Today, the community includes over 800 registered members who live on reserve in Sugar Cane in nearby Williams Lake, and across the globe. One of 17 Secwepemc nations forming Secwepemculecw, the greater stewardship land area extends from Shuswap Lake in the south, to Quesnel Lake in the north, and from Columbia-Kootenay Range in the east, to the Alexis Creek area in the west.

Is your facility ready for LED lighting?

To find out more about LED lighting for your horticulture facility, contact your Key Account Manager or Regional Energy Manager, or call 604 522 4713 in the Lower Mainland or 1 866 522 4713 elsewhere in B.C. 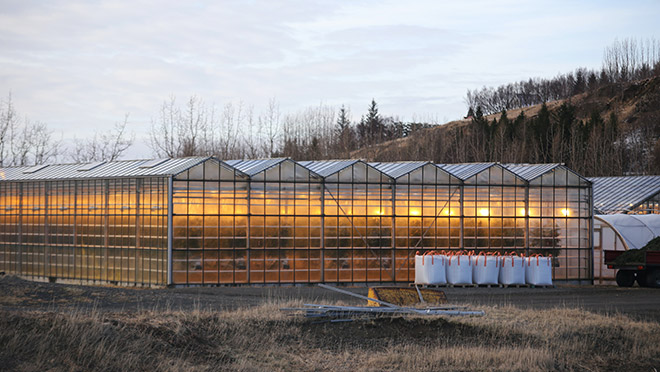