The 1,100-square-foot green roof on the Haynes' home in Saanich includes unusual sloped areas, an irrigation system and flowers that attract bees and other pollinators.

It may be hard to spot Fred and Cathy Haynes' home from above, but those who drive by on Prospect Lake Road often stop and gawk. And some are lucky enough to get a tour of the home's living green roof.

Once they've climbed a gantry ladder, they find themselves in a riot of some 37 different species of plants, plus bees and birds. It's a far cry from the usual asphalt or tile roof, and it's inspiring others to consider one for themselves.

"We wanted this home to be a showcase of what's possible," says Haynes, who also happens to be mayor of Saanich, B.C. "We want to demonstrate how you can use plants, landscaping, trees and house design as part of a one planet approach to living, reducing your energy costs, and living more sustainably."

It also reduces the Haynes' BC Hydro bills, which Fred believes are lower than similar-sized homes in the area. The home is comfortable year-round, with design features that include a small main bedroom – in a sheltered corner of the house – where body heat is enough to keep things warm without overnight heat on cold winter nights. The energy-saving features of the home's design yielded a Built Green EnerGuide rating of 51 GJ/year and Platinum certification. Fred and Cathy say they are delighted with their low BC Hydro costs, which even during the chilly period from Feb 19 through April 21, 2022 averaged $3.89 per day. And even with the infamous "heat dome" of late June 2021, Haynes says he only used his home's heat pump for cooling a few days last summer.

"The green roof keeps the home cool in summer months, and the house is situated out of the sun at the peak times of the day because it's nestled in the trees," says Haynes.

Pink sea blush and blue-violet camas are native plants that dominate a roof that features 37 different plant varieties, including an array of flowering plants that add colour and pollinator habitat from early to late season.

Roof is part of an integrated system on the Haynes' lot

The green roof, which cost $11,000 to install three years ago, and had 1,600 individual plantings, is part of what Haynes calls a "whole, integrated system" on the property. Strategically placed trees and hedges in the garden provide shade, help block cold winds, act as "ecofilters" against dust swirling in from Prospect Lake Road, and provide habitat for birds. To encourage wildlife, the garden hosts bird and bat houses and fencing to prevent cats preying on a resident flock of native quail. There are pear, fig, apple, and plum trees on the lot, along with several vegetable gardens where kale and leek thrive, even in the winter.

The living green roof helps the home stay warmer in winter and reduces stormwater runoff that can damage waterways and negatively impact fish habitats in the lake.

"We can use the nutrient-rich water from the roof, which is like a kind of tea, to water our gardens," he says. "We planted woodland ferns and other ground cover under the trees, and all through the garden we've put a large number of logs that will break down and encourage little critters to live in the garden and keep it healthy."

One critter the Haynes are trying not to accommodate is the invasive wall lizard, a small, predatory gecko-like animal that originated from Europe and which has proliferated in Saanich and other areas of Vancouver Island and beyond. The roof was built with a lip on it to discourage the wall lizards, and it has worked so far.

With the slope of the roof, the soil and plants are held secure by anti-slip-baffles of 2-by-4s interlaid with rigid planting cells, and overlaid with tensile netting. The counterbalancing forces of the loaded netting on either side of the roof together with the plants help lock aeverything into place. To keep the roof watertight, there's a double-tar overlap sprayed with a bio inhibitor that prevents roots from boring through the membrane.

The Haynes' so-called "plant whisperer" Helen Hertel, who helped design the roof garden along with the team at Eco-Sense maintains the roof's plants, drops by to remove weeds and the uninvited guests that arrive courtesy of seeds in the scat dropped by passing birds.

The goal is to take the Haynes house to "Orca" status in the Green Shores Shoreline Development credits and ratings program. Started by the Stewardship Centre for British Columbia in 2005, the program was developed as a tool for waterfront property owners like Haynes who seek to develop their properties in a shore-friendly manner.

Toss in the fact that Fred and Cathy drive a Chevy Bolt electric car and also get around on e-bikes, and you get the picture. They're all in.

"Our children have blossomed and moved on, so we wanted to build a small home on a lake," he says. "We embrace the One Planet lifestyle and want to be as environmentally gentle as we can. This means we appreciate BC Hydro, which is the cleanest energy in the world, right?"

If not the cleanest, it's pretty close. Powered by water, BC Hydro electricity generation is 98% clean. And thanks to the Haynes' extraordinary efforts, which range from premium wall and roof insulation to a relatively modest home size of 1,600 square feet, they're limiting their use of our electricity as well. 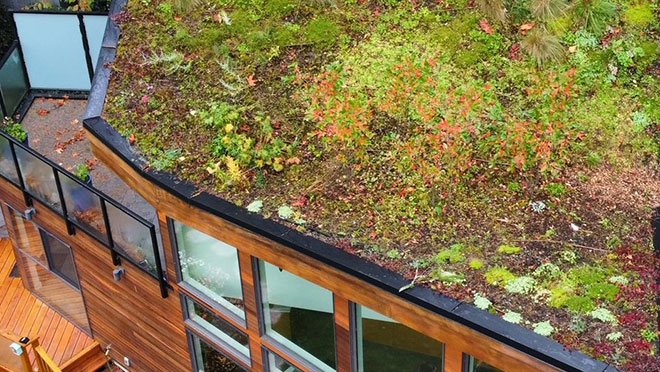 From shade trees that cool your home, to plants that thrive without buckets of water, a look at efficient gardening in B.C.