BMW's 330e hybrid sedan offers the driving performance you expect from BMW plus sustainability around the city with up to 40 km of electric range.

Electric in the city and thrills on the road, but consider replacing those run-flat tires

A return trip to the B.C. Interior in the midst of a historic heat wave turned out to be a test BMW's 330e plug-in hybrid sedan passed with flying colours... except when it wasn't flying.

Power and handling in the 330e proved to be off the charts, and oh-so-fun when navigating the hairpin turns and clogged passing lanes of the famed Hope-Princeton Highway. You don't get many chances to pass trucks and other slow-moving vehicles on that highway. So when you're trying to reach a Princeton restaurant in time to view France vs. Portugal in Euro Cup soccer over lunch, you need to take full advantage of those passing lanes.

In the city, you can get between 30 and 40 km on electric, then recharge at a workplace or public station. If you spend most of your time in the city, you can ride electric most of the time. And once on the highway, you're in good hands, especially with the pricier all-wheel-drive version that gets the most out of the combined 288 hp, via a 2.0-litre four-cylinder married to an electric motor and battery.

Interior comfort was generally great for a smallish car, especially considering that our family of three includes a pair of six-footers. The loaded 330e I drove sported sumptuous leather seats, A/C that never struggled to keep up in the heat wave, and all the intuitive tech you'd expect from a BMW. The drawback is that there's not a lot of room for anything beyond passengers. The small trunk meant the guitar stayed home. There was just enough space for three overnight bags and an assortment of south Okanagan wine, as a wine box just fits in that trunk.

We also golfed on our trip to Osoyoos, which meant that we loaded up a whole lot of gear – including a cooler of food – in the Mazda CX-5 our friends drove on this long-awaited vacation. And that support vehicle proved vital due to the one major beef with the 330e: flawed footwear.

The 330e is a smallish car, but interior comfort is good, even with a pair of six-footers in the vehicle. Controls and driving options are first-rate.

Run-flat tires are convenient, except for when they're not

Flat tires are so few and far between that we tend to forget they can happen. And on our five-day trip, it happened twice – once on the Mazda, and once on the BMW – with wildly different results.

The Mazda flat, courtesy of a long screw, occurred on the drive back from a fabulous dinner at Tinhorn Creek winery's Miradoro restaurant near Oliver. We were able to change the flat tire, replace it with the undersized temporary spare, and get it repaired the next day at a tire shop in Osoyoos.

The BMW flat, on the other hand, spawned a grand adventure that was instructive in the extreme. What happens when you're on a mountain highway and a small roofing nail causes a flat – rapid enough that you can hear the air leaking out – in a run-flat tire? The answer: After driving 10 or so kilometres on a deflating tire, a tire-pressure alert eventually urged me to pull over and call BMW Roadside Assistance, about 160 km away from home. The car was towed first to Hope and then to a BMW dealership in Langley, and I grabbed a cab ride from Hope to Vancouver.

Run-flats are beneficial when driving around the city, where the beefed-up sidewalls of the tires allow for you to continue driving – albeit slower than usual – to a place where you can get a repair. BMW and several other automakers – including Mercedes – have gone to run-flats to offer that convenience plus the interior weight and space savings (no tire, jack or tire iron). But with no spare tire, you don't want to be stranded in the middle of nowhere. Run-flats are also expensive, and if you drive one anywhere close to the prescribed 100-mile distance limit, the damage to the tire can require replacement.

I have a friend – a huge BMW fan – who has recently switched out the run-flats in his X3. The reason? Two years ago on the Coquihalla Highway, he had consecutive blowouts of his two rear run-flats, and spent six hours (a tow to Hope included) figuring out how to get home. The cost to replace them would have been nearly $1,000, but luckily, he got a pair of used run-flat tires shuttled out to him by a relative from Vancouver. He has since purchased four new regular tires and a rapid inflation safety kit.

Meanwhile, the driver of the Prius cab who got me from Hope to Vancouver along with bags and boxes extracted from the BMW (my wife and son squeezed into the Mazda for the ride home) is also a BMW fan. And even before he heard my story, he was already planning to replace the run-flats on his BMW once they wear out.

Kudos to BMW Roadside Assistance for quickly getting the tow arranged and for compensating me for the pricey cab ride into Vancouver. But really, I would rather have had changed to a spare and nursed the car home.

Comfy and sporty, this BMW will hit the sweet spot for those looking for 3 Series performance with green cred in the mix. If you don't have charging at home, it won't take you long to charge up the small battery pack at work or while parked for lunch or shopping. It's glorious on the highway, and will get you about 450 km between gas stations. You can get a rear-wheel drive base model for just under the EV rebate maximum of $55,000 – which nets you $4,000 in combined federal and B.C. rebates. But cargo space is limited, and if you fork out for the loaded model I drove, it'll cost you over $66,000: say hello to a riot of extras including wi-fi hotspot, head-up display, parking assist, an M Sports Package and adaptive M suspension, and say farewell to the PHEV rebates.

The Canadian Automobile Association's cost calculator tool estimates the costs of ownership – including purchase price, fuel costs, depreciation, maintenance and insurance – to lease or own a vehicle over five years. Here are the numbers for the all-wheel X-Drive versions of both the 3 Series plug-in and the gas-only version, based on 20,000 km per year on average and a 45/55 split between city and highway driving. 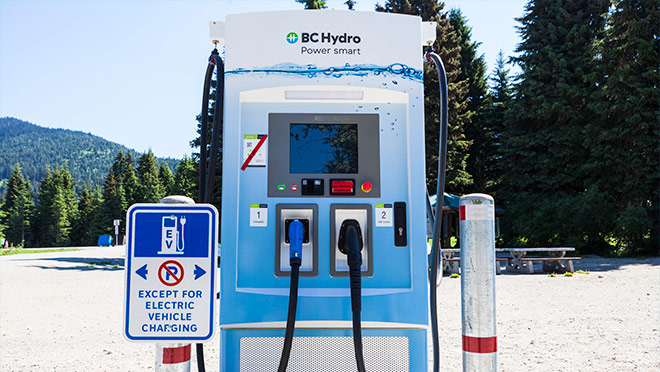 While myths around the practicality of driving electric vehicles persists, the facts point to a different reality and underscore why EVs are increasingly popular.