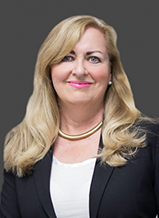 Valerie brings a wealth of experience to the BC Hydro Board, including Energy Analyst, East Asia region, with the World Bank in Washington, D.C., Vice-President and Treasurer of BC Gas and Manager of Finance and Senior Auditor with MacMillan Bloedel Ltd.

Valerie’s previous directorships and officer experience includes Governor of Crofton House School, Director of the Forum for Women Entrepreneurs, Director and Past Chair (and Founding Member of) B.C. Women's Hospital Foundation, Member of the BCIT International Advisory Board, and Director of B.C. Transit.

Valerie was recently recognized as one of the BC Business Most Influential Women in Finance. She is a member of CPABC and the Institute of Corporate Directors.