All dressed up and ready to be sold, the former Sumas Substation on B.C. Electric's decommissioned New Westminster-to-Chilliwack rail line features 11,000 square feet of living space in the main house, plus three self-contained rental suites.

A massive 11,465 square foot property known as the Power House and located on the Sumas prairie in Abbotsford is up for sale again, this time for a cool $3.495 million. And it's just one of several former BC Electric/BC Hydro buildings in B.C. that have been converted to residential.

By contrast, the Earles Street Substation project in East Vancouver is tame – a cluster of 12 stylish strata condos that earned a City of Vancouver Heritage award in 1991. But there's a link to the two – or at least there once was – when electricity-powered trains known as the Interurban stretched from downtown Vancouver to Chilliwack, and from Vancouver to Steveston.

The British Columbia Electric Railway, operated by BC Electric – which later became BC Hydro – ran streetcar and Interurban commuter and freight lines in Vancouver and beyond from 1897 through to the closure of the last Interurban rail line (Marpole to Steveston) in 1958. And those rail lines all required substations for the conversion of power, including substations at Earles Street in East Vancouver and at Sumas.

Today, the Power House is a mansion at 39623 Old Yale Road in Abbotsford. Made of concrete, steel, and brick, it began life in 1906 as a substation for BC Electric that housed equipment for powering the Interurban's Fraser Valley Line, which stretched from Chilliwack to New Westminster, where it linked up with a line into Vancouver that included the Earles Street substation. By the late 1940s, BC Electric's "rails to rubber" campaign – a strategy of switching from rails to electric-powered trolley bus lines – led to the decommissioning of the Interurban network and Vancouver's streetcars.

Most substations along the lines were eventually destroyed, but a few remain. Two were repurposed for residential use, as was BC Electric's former office headquarters on Burrard Street, which stands today as the Electra condo apartment building at the corner of Burrard and Nelson in downtown Vancouver. Vancouver residents also now walk and cycle along the Arbutus Greenway corridor that was once a BC Electric Interurban rail line that joined downtown Vancouver with Marpole as part of the Vancouver & Lulu Island Railway to Steveston.

Sumas Power House is a massive home that sits on 2.35 acres

The Power House is not everyone's cup of tea, so to speak. Asking prices for the mansion – once described as the "weirdest home in Abbotsford" in a news story – have fluctuated to a high of $5 million in recent years, and it was last sold in 2007 for $714,592, a fraction of the current $3.495 million being sought.

The current listing boasts of the Power House's 6,000 square feet (plus garage) in the main part of the home, plus rental income of $14,000/month from three self-contained suites on the property. Here's an excerpt from the listing:

"This home underwent an extensive multi-year restoration that now offers superb modern amenities including a theatre room, wine cellar, elevator, high speed technology and multiple luxurious living areas. Nestled on 2.35 acres of lush landscaping. Adjacent to a 30-acre greenbelt attached to the south of the property, with forest/mountain clean air/water and a beautiful stream flowing year round."

Got an extra $700,000 lying around you can use as a down payment on a home that might be the ultimate? Not afraid to pay $11,000 in annual taxes? This property could be for you. 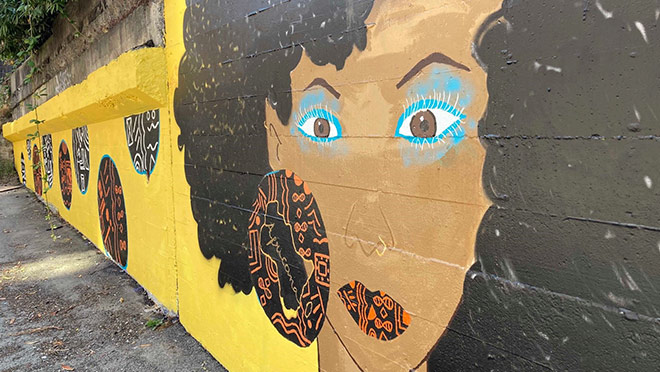 The Vancouver Mural Festival added three murals to BC Hydro's Murrin substation tied to the history of Vancouver's Black community and Hogan's Alley.