Why not avoid falling trees by putting lines underground?

B.C. has a lot of trees along its power line corridors. Putting all lines underground to prevent outages might seem like a simple fix – but it’s not as straightforward as it may seem.

The pros and cons of building power lines underground

Following large-scale power outages, like the storm that hit B.C.’s South Coast on December 20, some customers wonder why we don’t put more of our distribution lines – the lower voltage lines that deliver electricity to your home and business – underground.

It would seem to be an easy way to reduce their vulnerability from falling trees when stormy weather hits. Especially since storms recently are becoming more frequent, and more severe.

The short answer to that question is that it’s expensive, would increase our rates, and wouldn’t prevent all outages.

While underground power lines aren’t as susceptible to damage by wind and falling trees as overhead lines, there are substantial operational and cost considerations to putting the more than 59,000 kilometres of distribution lines in our system underground.

Underground lines are up to 10 times more costly

One of the first things to know is that underground lines cost considerably more than installing overhead distribution lines, and as with any increased costs, the cost of doing that would be passed on to our customers in the form of higher rates.

In general, the installation of underground distribution lines is up to 10 times that of overhead lines of the same voltage and distance – and converting existing lines to underground lines also includes the added cost of dismantling and removing our current infrastructure.

The installation of underground lines is also significantly more intrusive because of the need to cut roads and sidewalks, dig a trench, refill a trench, and repair the surface. This can create logistical challenges and cause major disruptions to traffic, homes and businesses – especially in urban areas.

Other factors that affect costs include:

Where we already use underground lines, and some comparisons

In less dense areas, we need to factor in things like available land for the construction of underground duct banks, ground-mounted equipment and other geographical constraints, costs to customers for the conversion of service entrances from overhead to underground, the cost of removing and disposing of existing overhead equipment and the number of customers served to ensure investments reflect the best interest of all ratepayers.

And those investments would be very significant: the estimated cost to underground the existing overhead distribution system on Salt Spring Island alone is approximately in the range of $600 million to $700 million.

To provide some additional context on the cost to our customers, if we were to move our whole distribution system underground, consider a few comparisons from other jurisdictions.

The city of Anaheim, California is in the process of undergrounding all of its lines for aesthetic reasons. It’s a much smaller area to manage; Anaheim is only 130 km2 (or only a bit larger than the city of Vancouver). Even still, each mile of underground line will cost over $3 million and the project will be spread out over the next 50 years. It’s currently funded by a 4% surcharge to their customers. The state of North Carolina – with an area about a sixth of the size of B.C. – investigated the cost of undergrounding its distribution infrastructure after a series of storms, and found that it would require a rate increase of 125%.

While the financial costs to underground infrastructure are significant, they’re not the only reason to keep things overhead.

While buried power lines are protected from the wind and damage from trees that are common causes of outages, buried lines need to be engineered differently for protection from flooding and earthquakes, which is an important consideration in B.C., where we have significant river systems, heavy precipitation, and a highly active seismic zone.

That additional engineering and specialized construction comes at a higher cost compared to overhead lines. When repairs are required for underground lines (whether due to an emergency or disaster, or day-to-day damage), those repairs are also more lengthy and complex, which could create additional delays after a disaster.

In a storm event, high winds can cause failure to our above-ground infrastructure – such as our substations and transmission towers – making underground distribution lines still susceptible to outages when the wind start to blow. For areas such as subdivisions where distribution infrastructure is already underground, they can still be affected by issues at our substation.

While the number of outages may decrease with an underground distribution system, the length of time customers are without power will typically be longer. That’s because it’s more difficult to locate the cause of an outage related to an underground line. Repairs are often more complex with underground lines, given their close proximity to other utility infrastructure and the need to use excavating equipment. We see this sometimes in urban areas when underground lines are occasionally damaged during residential and commercial construction projects, if underground cables are struck during excavation. Those outages tend to be longer and require more extensive repairs than day-to-day outages to our overhead distribution lines.

The same is true when it comes to maintenance: while the lines may need maintenance less often, when it’s required, it would also be more costly and typically take longer.

From an aesthetics perspective, underground lines are certainly the way to go – no more distribution lines impeding a nice view.

When it comes to safety, both overhead and underground electrical infrastructure can pose hazards to the public. With overhead power lines, the most significant risk is when live power lines are brought down by high winds and trees, as well as motor vehicle accidents involving power poles or transformers. The safety risks of underground systems include public and worker exposure to energized equipment at or below ground level (such as padmount transformers, switches and equipment) due to equipment failures and motor vehicle accidents.

Construction and excavation projects also pose the risk of contacting underground infrastructure – which is why it’s always critical to call or click before you dig.

Another seemingly simple idea: just remove all the trees that might cause an outage. But with the weather B.C. experiences, even healthy trees can fall.

Investing in our system to prevent outages, and when we prune trees

Some people might suggest we take the radical step of just trimming all the trees that are close to our power lines.

After all, trees account for one-third of all outages that we experience. That's no surprise; our service territory covers most of the province, including some regional ecosystems that are heavily forested, with large trees.

BC Hydro spends roughly $50 million annually to maintain vegetation along our transmission and distribution lines. Our focus is on routinely pruning or removing tall-growing trees to prevent growth of vegetation into the powerlines to ensure public safety and avoid power outages. We also inspect and remove trees adjacent to the power lines that are in declining health, to reduce power outages from trees falling into and damaging the electrical equipment.

Effective vegetation management is a balance: it’s designed to maintain a safe and reliable power system under most conditions.  But we don’t remove all trees that could possibly hit power lines: it would be cost-prohibitive, and as you might guess, unacceptable to most communities.

Most tree failures that affect the power system occur during unusual weather events, such as prolonged drought in the summer. The most significant impact happens after several days of heavy rain or snow that saturate the soils and weaken tree stability, followed by high winds. In those conditions, even healthy trees can fail and cause power outages and other widespread damage.

But we’re always keeping an eye on things, and we do make changes in areas where it’s needed.

All transmission lines are inspected for vegetation hazards each year, and distribution lines are inspected thoroughly before each maintenance cycle, typically every three to five years, depending on the growth rates in the region. Where we have a pattern of tree failures that affect our infrastructure, we’ll work to do increased tree removals to reduce the risk of trees impacting the lines. 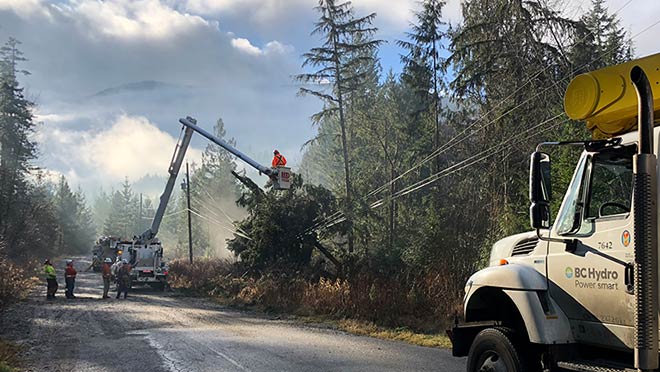 On Thursday December 20, a windstorm hit the South Coast of British Columbia. The event would go on to become the most damaging storm we've ever experienced, affecting more customers and damaging more electrical equipment than any previous storm. 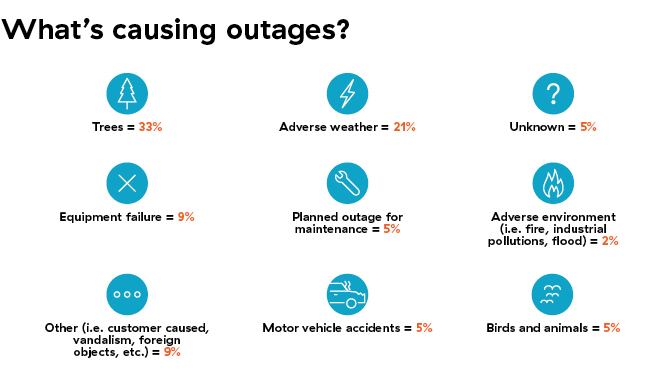 We've crunched the numbers, and present a visual guide to power outages in B.C., including how we stack up against the rest of Canada and what causes those outages. 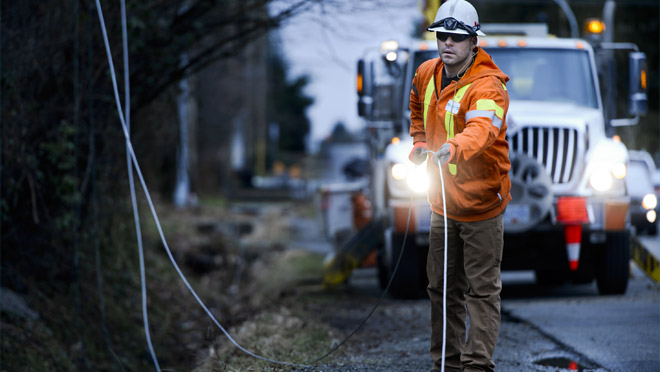 7 things you should know about how we restore your power

Find out how our crews prioritize who gets power back first during major storms, and what's going on behind the scenes.