After slide rocks tower, BC Hydro gets innovative

A BC Hydro transmission tower that had been dislodged by a landslide at Anderson Lake, three hours north of Vancouver, comes to a rest near railroad tracks after being cut free from power lines and pulled down the sleep slope.

Tower needed removal from steep slope, but climbing it wasn't an option

There are close to a million poles and towers that allow BC Hydro's transmission and distribution power lines to stretch over 79,000 km across B.C. Some are a lot harder to reach than others.

Earlier this month, a heads-up from CN Rail launched an unusual effort to deal with a 30-metre-high transmission tower that was in danger of giving way after being imperiled by an avalanche on a steep slope area above the railroad alongside Anderson Lake. Two factors made the job particularly challenging – a location about three hours north of Vancouver that was inaccessible by vehicle, and a tower that was too unstable to climb.

Anderson Lake is no stranger to dramatic slides – a contractor for CN Rail regularly clears slide debris from the tracks on the line in the area. And hundreds of feet below the surface of the lake sits evidence of a 1944 rock slide: PG & E locomotive No. 56, which slammed into the slide, derailed and plunged to the lake bottom.

On a slope too steep to climb, BC Hydro crews were lowered down from a helicopter to attach guy wires to a compromised transmission tower and to release power lines (known as conductors) so that the tower could be removed.

One tower footing dislodged in slide: What do you do?

CN Rail called BC Hydro to report the slide and the fact that one of the tower's feet no longer looked stable. It would have to be removed, and a new tower would need to be placed further up the slope, safely outside the landslide zone.

Normally, workers would climb a damaged tower and cut the cables to allow for its removal. But this tower was on a steep slope in an active slide zone, making the tower a no-go zone for any crew members.

"If a tower is leaning like that and the status of the legs is unknown, where there's no access to check them, you can't climb them," explains Paul Lu, a BC Hydro power line technician sub-foreman on the project. "In the past I think that without [helicopter] access to the tower, they would have just cut it down. You'd have guys out on ropes with a chop saw and cut the tower down with the wire on it – which would have been a lot more of a mess. That probably would have taken down the towers on either side of it too."

It basically toppled straight down the hill upside down, because the slope was so steep.

After consulting with geotechnical , structural and environmental engineers on how best to remove the damaged tower, Lu and fellow sub-foreman Steve Lang – both with BC Hydro's Lower Mainland transmission group – came up with an alternative. The idea was to lower a crew member on a line from a helicopter to get the work done safely.

"Hanging from a helicopter, we installed two control guy wires up the hill," says Lu. "We basically anchored the tower back to two huge trees, and then we hung a guy wire on the downhill side going all the way down to the railroad tracks, in case we cut all the wires clear and the tower didn't fall over by its own."

And that's exactly what happened. Once free of the power lines, known as conductors, the tower tilted but didn't fall. What remained unclear was just how well anchored the tower's other legs were.

"When we started pulling it from the railroad tracks below, it came over to about 45 degrees, and then stopped," says Lu. "The foundation anchors in the footings were quite strong, and holding it up there. After that, we had to yard on it a little harder, and as soon as one of those anchors went, it fell over quite quick. It basically toppled straight down the hill upside down, because the slope was so steep, and slid probably 400 or 500 feet right down to the tracks."

After the steel tower was removed from the slide zone above Anderson Lake, wooden poles were brought in by helicopter and used to build a new tower outside the slide zone.

The other key work was around the replacement tower. BC Hydro chose not to go with another rigid steel lattice tower, opting instead for a three-pole wood structure – the poles flown in by helicopter from the town of D'Arcy at the south end of Anderson Lake. The new tower was installed farther up the hill, and out of the slide zone, but that installation wasn't easy, either.

The slope was so sleep that it was impossible to walk up. Crew members working on the footings of the new tower – who had needed to hike two kilometres in from the nearest road (known as the Highline) – needed to be secured by ropes on a slope that was steeper than 45 degrees.

"To access some of the wire on the ground for doing the repairs, we had to lower ourselves down the slope and choose spots where we could actually tether ourselves by rope to trees," says Lu. "There was no way to work the wire without being tethered to a tree at any given time."

The crew worked on and off for a month to get the job done, in weather Lu describes as ranging in from "socked in and snowing" to "bluebird skies and minus-15".

A few weeks later, Lu headed north to help deal with another transmission line repair after an avalanche fell off a shelf near Terrace and slammed into power lines, pulling a transmission tower down.

Crews had to rely on a helicopter to get work done on the steel tower, which had to be removed after one of the supporting feet of the tower was dislodged during a slide.

About BC Hydro's transmission lines

Transmission lines are the big lines strung between large metal towers and wood poles that move power across the long distance between where electricity is generated and where it is used.

One of the big differences between transmission lines and the kind of distribution lines you'll see in your neighbourhood is the amount of voltage. High-voltage power transmission allows for less loss of power (caused by resistance) over long distances along power lines. Typically, only larger substations – which convert voltages – connect with these high voltage transmission lines. The power is "stepped down" – or converted to a lesser voltage – and sent to smaller substations in towns and neighborhoods.

Around 80% B.C.'s electricity is generated in the Peace and Columbia regions, while 70% to 80% is used in the Lower Mainland and on Vancouver Island. That requires high-voltage power sent over hundreds of kilometres from the generating source to the urban areas of highest demand. 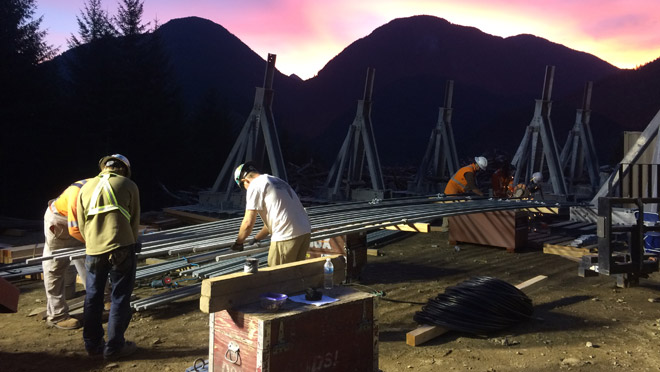