Decorative wraps in, graffiti out, for B.C. utility boxes

Show caption One of Chilliwack's popular utility box wraps features an underwater image of salmon fry in the Vedder River.

Show caption A more than 120-year-old salmon can label is a welcome addition to a BC Hydro electrical box that sits beside the Gulf of Georgia Cannery historical site and museum in Steveston.

Show caption A BC Hydro box outside a 7-Eleven store in Chilliwack that used to be regularly targeted by graffiti taggers now sports a dramatic closeup of tree branches.

Show caption A grey roadway in North Vancouver gets a welcome splash of art and colour with this wrap of a BC Hydro utility box.

BC Hydro offers partial funding of wraps for electrical kiosks

A BC Hydro transformer box near the Gulf of Georgia Cannery in Steveston is now public art, a steel box that now looks like the world's largest tin of canned salmon.

About 120 km east, a BC Hydro box near a Chilliwack 7-Eleven that was a favourite target for graffiti taggers is now covered in a spectacular close-up image of tree branches.

These boxes are examples of how local imagination and BC Hydro's decorative wrap program can work together to revitalize boxes and introduce a new dynamic to public spaces around B.C. While businesses, stratas and other community organizations groups need to pay for the wraps, local governments can get up to one-third funding of wraps through BC Hydro's Beautification Fund.

Across B.C., there are more than 60,000 green or beige pad-mounted BC Hydro transformers, which take higher voltage from distribution power lines and transform it to lower voltages for residential or commercial use.

"Every one of the kiosks we've wrapped, including the BC Hydro ones, used to have graffiti on them," says Darrell Lindhout, a project manager with the City of Chilliwack who has championed, and delivered on 10 BC Hydro and 12 other utility kiosks in the Fraser Valley Community. "To date, not one of the 22 kiosks has been hit with graffiti."

The wrapping of BC Hydro boxes is part of a growing trend across B.C. to wrap bland or graffiti-scarred utility boxes – everything from street light electrical boxes at intersections to water pump stations – with images digitally printed on graffiti-resistant vinyl decals. The images can range in theme from the historical, to beautiful photos of the environment, original works by local artists, to photos of foliage that blend in with local landscaping and act as camouflage.

"People are always happy to see boxes wrapped, because they are a bit of an eyesore on the city streets," says Christine Corris-Wingfield, who in her role as the City of Richmond's public art assistant helped the Steveston Harbour Authority with their wrapping of the BC Hydro box near the Gulf of Georgia Cannery.

Which image you go with depends on local context

Context is everything with wraps. Just as a utility box covered in a foliage image nicely "disappears" in front of a hedge, a well-chosen image can transform an ugly box into a remarkable object that becomes an Instagram favourite. Such is the case with the box near the Gulf of Georgia Cannery, a popular National Historic Site and museum that brilliantly tells stories behind Steveston's salmon industry.

The Steveston Harbour Authority, Gulf of Georgia Cannery, Steveston Historical Society and Richmond Arts Coalition worked together on the project, which selected the salmon can label from the cannery society's archives. The historic label was produced by the Gulf of Georgia Canning Company for the 1894 or 1895 season, and it's a natural fit for the metal BC Hydro kiosk.

"Initially, when our installer showed us the proof of the installation, I didn't like the way the lines were lining up," says Corris-Wingfield. "I said 'No, it has to look like a can. It has to line up and wrap like a can.' And it works now."

Those requesting wraps must apply to BC Hydro for permission to wrap each pad-mounted transformer and sign a 10-year agreement for each installation. As part of the agreement, the requesting party pays for, maintains and owns the wrap (costing roughly $800 to $2,000 each), which must be installed by an established wrapping company of the party's choice that has taken (or is willing to take) BC Hydro's safety training.

In Richmond, an open call for artists produces a list of artists the City hires to produce original art such as Andrew Briggs' bright, stylized salmon industry graphics on the No. 1 Road and Bayview water pumphouse. In Chilliwack, Lindhout has relied on his own photography to produce images ranging from tulips to an amazing underwater shot of salmon fry in the Vedder River.

Not coincidentally, there's been a noticeable reduction in graffiti across Chilliwack, due in part to a decision to also hire a graffiti removal contractor. Both Lindhout and Richmond's Corris-Wingfield strongly recommend selecting "busy wrap images that minimize open areas that might attract taggers".

"Obviously Chilliwack is very rich in the outdoors and agriculture, so we selected a lot of flowers, strawberries, blueberries, some mountain shots," says Lindhout. "But there's actually a science to it in terms of the colours you use and which images you select. I did some research online and talked to graffiti removal companies. I learned that if taggers don't consider it a blank canvas, they don't like to touch it." 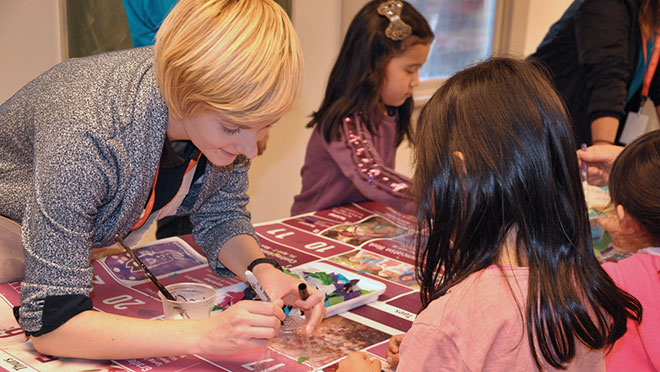 The lighting improvements at Coquitlam's Places des Arts saved 58,000 kWh, which was a 24% reduction in their overall electricity use.

Alert Bay on B.C.'s central coast looks to save $10,000 a year with a switch to solar power at five buildings and conversion of boardwalk lighting to LED.