Flanked by her family, Georgean Price stands beside the generation unit shutoff at John Hart Generating Station at Campbell River. She had the honour of shutting down the turbine as part of a project to replace six aging turbines at the power station.

It was almost 70 years ago that Georgean Price moved into Hydro Hollow, a small community near Campbell River built to house John Hart Generating Station workers and their families. Her late husband Art, the first plant manager at the BC Hydro powerhouse, would have loved the role she played last month.

Georgean, 98, was the one tasked with the manual shutdown of the first of six aging turbines soon to be replaced as part of a massive project to move and upgrade the powerhouse on Vancouver Island's Campbell River.

"This is a very proud moment for me," said Georgean, who seems to have aged much better than the power station that – at a mere 70 years – is almost three decades younger. "I am honoured to represent my husband Art, my family and the Power Pioneers who have worked at John Hart over the years."

The Power Pioneers are BC Hydro's amazing group of retirees and retiree family members who dedicate themselves to "supporting our communities and supporting each other." They have a 75-year tradition of raising funds and providing volunteer support for local charities, and they make preserving history a priority. The story of Hydro Hollow (we've published an excerpt online) is part of the Power Pioneers' latest book People, Power & Progress, which tells the story of the John Hart Dam and other Campbell River projects.

As a Power Pioneer and a former resident of Hydro Hollow, Georgean figures prominently in the book. She's part of three BC Hydro generations: her son Gordy Price and grandson Chris Thompson have both been working on the John Hart Generating Station Replacement Project.

A few years ago, Georgean looked back on what it was like to raise a family at Hydro Hollow.

"The Hydro children who were fortunate enough to have been raised in the town site will tell you that it was the best time of their lives," Georgean wrote in a story published on BC Hydro's employee website. "The children had the freedom to wander out and about living in nature's back door in the middle of [Strathcona Provincial Park]. Families not only lived there, they grew up there. My husband became the superintendent and hired many of the town site children, who have gone on to hold key positions throughout Hydro's workforce."

In the story, Georgean said her husband worked closely with local fisheries officials to monitor flows on the Campbell River to protect fish, a practice that continues today. She also talked about Art using a BC Hydro snow cat to help local search and rescue missions, "loading it into the belly of a large helicopter and flying off into the mountains to assist."

Art Price was the first plant manager at the John Hart powerhouse near Campbell River.

By the end of 2018, a new powerhouse will be in operation

Georgean shut down the first generator to allow for substation upgrades, which will receive power from the new underground powerhouse after completion of the $1.098 billion project in 2018. The other five generating units in the existing John Hart Generating Station will be permanently shut down in 2018.

The key components of the generating station replacement project are:

Take a 360-degree tour of the work on the John Hart Generating Replacement project, or get project details on our John Hart project pages.

Interested in buying a copy of the People, Power & Progress book? It's available for $25 from the Power Pioneers. 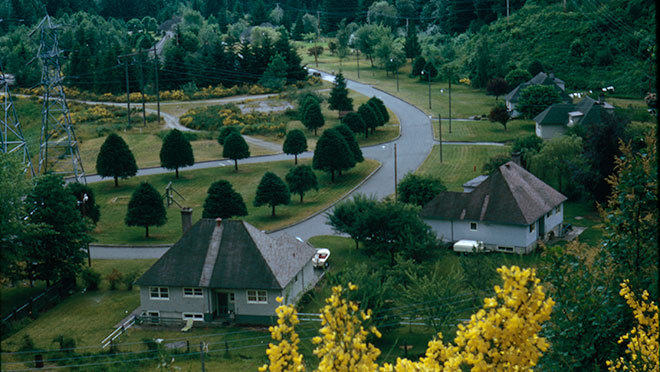 An excerpt, edited for brevity, from 'People, Power and Progress', a BC Hydro Power Pioneers book about the John Hart Dam and other projects on Vancouver Island's Campbell River.

Bennett Dam at 50: 'It was unbelievable to take that on'

50 years after the construction of W.A.C. Bennett Dam, a look at the dam's legacy and the future of hydroelectricity through the eyes of BC Hydro’s new president.