Show caption The 2017 PNE Prize Home is on display at the PNE through this year's Fair, and then will be moved – in six modules – after the Fair is over.

Show caption A huge mirror is featured in one of the 2.5 bathrooms that are part of the home.

Show caption Comfortable seating for six in the home theatre.

Show caption Once moved, the home will have a view to Okanagan Lake from the upstairs games room and bar.

Sometime shortly after the last mini-doughnut is consumed, the last scream heard and stomach turned on The Revelation, six loaded semi-trailers will leave The Fair at the PNE and head east on Highway 1 through the Fraser Valley and on to the Okanagan.

Awaiting the trucks' arrival will be a massive crane perched on the Naramata Benchlands, the final destination for this year's $1.6 million PNE Prize Home. The crane's job is to take the home's six pieces and reposition them to recreate a beautiful ENERGY STAR certified home whose green credentials include its modular construction.

"It's a real logistical challenge," says Randy Plewes. "Once you have a very large crane on-site – a crane that can be $1,000 an hour – it's important that the units are sequenced and staged efficiently so that they can be craned into place as quickly as possible."

Plewes is the operations manager for Freeport Industries Ltd., builders of the 2017 PNE Prize Home and unabashed fans of modular construction. So while most of the buzz around this year's home has been around the master bedroom's in-wall espresso machine, the four-seat home theatre, or the home's view of Okanagan Lake, Plewes is pleased to be talking about the benefits of modular construction.

In a nutshell, he says homes built in a factory before being transported to a site can be built faster, better and with less environmental impact.

"While we're preparing the site, we're actually building the home in the factory," says Plewes, who oversees Freeport's factory in Westbank, B.C. "So for starters, you've got speed. You excavate your site, pour your concrete and then continue on through the process. All our certifications are streamlined. At a normal site you're going to have framing inspections, electrical inspections, plumbing inspections. But because we're CSA certified, we can fast-track a lot of those approvals."

Building in a factory also reduces weather exposure, human error and site waste. These all add to the quality of the home by making it more air tight and energy efficient. "Our homes are dry through the whole building process," says Plewes.

"We're not sending them out on steel frames on dollies and setting them up in a park," says Plewes. "These are real homes with real concrete foundations, with crawl spaces or basements just like a normal home."

Furniture design in the home was provided by Lane Home Furnishings, a division of Yaletown Interiors.

How a luxurious 3,100-square-foot home gets ENERGY STAR approval

There's a fair amount of West Coast modern bling in this year's home, from the appliances in the gourmet kitchen, to that much-ballyhooed bedroom espresso machine, to an under-the-stairs wine cellar. But Freeport worked closely with the PNE and BC Hydro to ensure the home would meet the ENERGY STAR for New Homes standard, which makes it 20% more efficient than similar-sized homes built to Code.

To meet that requirement, this year's home includes:

ENERGY STAR homes are also known for being more comfortable, with more even temperatures, less noise and less dust than in comparable homes. The family that moved into last year's Freeport-designed PNE Prize home, which sits right alongside where the 2017 home will be placed, is big on the home's comfort. And they've been surprised that while winds have brought ashes and dust from this summer's Okanagan wildfires to Naramata, there's been no trace of it inside the home.

The 2017 home features upstairs and downstairs patios, both covered for a good reason.

"I live in the Okanagan myself and you have to have shade on our outdoor patios, and to protect it from the rain," said Plewes.

There are two covered patios in this year's home, including this one off a first-floor bedroom.

Most of Freeport's buildings are smaller, two-module homes

Aided by the PNE-BC Hydro partnership, Freeport continues to improve the energy efficiency of the PNE prize homes it builds. While this year's home is considerably more efficient than a code built home, BC Hydro is encouraging companies like Freeport to aim for net zero energy performance – a home so efficient that it is able to generate as much energy as it needs annually – down the road. This is the goal for B.C. by 2032, and leading builders plan to get there sooner.

The size of the PNE home is a bit of an anomaly for Freeport Industries, which does most of its business in much smaller 1,000-to-1,500-square foot homes.

Freeport's work includes a 45-and-over Sage Creek retirement complex not far from their factory in West Kelowna. Plewes says a big part of the modular home attraction is that "from the time we start in the factory until the time the customer moves in is 60 days."

Modular homes can also be transported to fairly remote locations, pretty much anywhere roads are wide enough – and bridges wide and strong enough – to handle semi-trailers loaded with 35,000-pound modules.

And then there's the question of the cost.

"In the current market it's hard to find trades anywhere at a decent price – it's all about supply and demand," he says. "It's very competitive to get skilled tradespeople, so I'd say right now the cost is pretty much a wash.

"And if you're going to a remote location, it's a no-brainer. It's going to be virtually impossible to find skilled tradespeople to do all the various work, economically. We can go into a remote location and have a home set up in two weeks and be done." 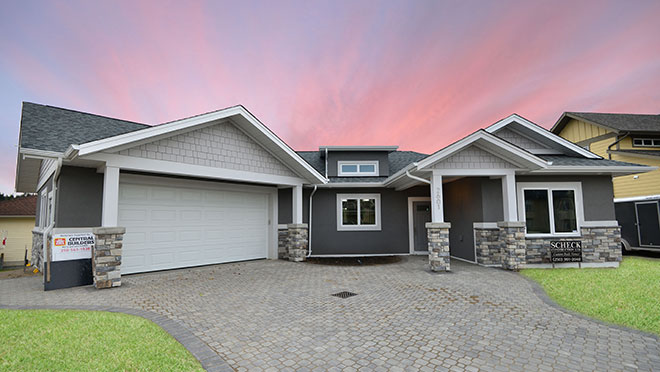 Building a dream (and doing it efficiently) in Prince George

A lottery prize home with concrete walls in Prince George is one of the first to receive ENERGY STAR for new homes certification. 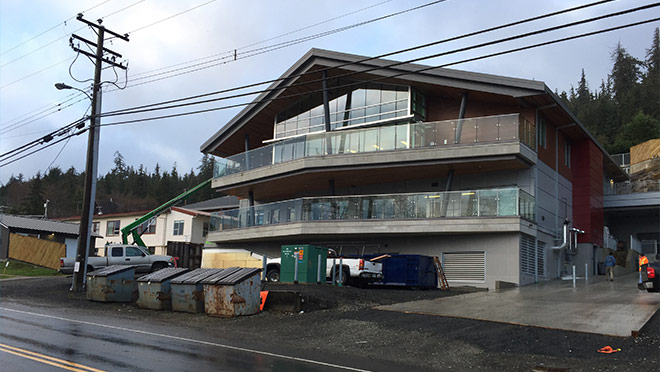 BC Hydro helped ensure a new health centre in Haida Gwaii was energy efficient in addition to being a huge upgrade in services and comfort.