Show caption Final touches are still being done on the new Haida Gwaii Hospital and Health Centre – Xaayda Gwaay Ngaaysdll Naay. But the building is now in operation and is getting rave reviews from patients and staff.

Show caption Views to the ocean were a priority in the design of the hospital, which includes an expansive deck overlooking the Queen Charlotte harbour.

Show caption Most hospitals include a basement morgue. But the Haida Gwaii Hospital and Health Centre features a standalone mortuary house designed by, and to the proportions of, a small Haida mortuary house structure.

Long-term care patients at the Haida Gwaii Hospital and Health Centre – Xaayda Gwaay Ngaaysdll Naay – look out massive windows to a view of the harbour in one of the most picturesque coasts of B.C. A floor below, the emergency room, laboratory and imaging facility are part of an ambitious plan to house – all in one building – what used to be spread out in five aging structures.

Beyond structural efficiencies, an estimated energy savings of $19,000 will be incurred through the LEED Gold design. Additionally, evenings and overnight, 16 hours a day, the hospital can be staffed and managed by just two nurses.

"The design matches exactly what we wanted," says Peter Kallos, Director of Development services for Northern Health, and Project Director. "What we wanted was a building that could work well for the Village of Queen Charlotte, Skidegate and the surrounding area, where Northern Health can deliver all services that previously were under five roofs, under one roof. And we wanted the building to function for two thirds of the day with minimal staff."

After the regular day shift, the lower floor is shut down, and the remaining staff on the upper floor take care of patients in eight long-term and eight acute care beds. Those staff monitor, via closed-circuit TV, the emergency area below and call in additional staff when necessary.

The hospital's design is unusual in that the roof is pitched, rather than flat, a choice Kallos says "everyone wanted because, in accordance with traditional Haida design, the long pitched roof is still the vernacular that's popular in that area."

"Because this is Haida territory and the indigenous culture goes back, some say 10,000 years in that location, we were able to infuse some First Nations features and imagery into the building itself," he says. "We translated the name of the hospital into Haida, and instead of a morgue being located in the basement of a hospital, as they usually are, we have a standalone mortuary house that is designed by, and to the proportions of, a small Haida mortuary house structure. It's built out of cedar and heavy timber with a beautiful painting on it of an eagle and raven."

Kallos particularly likes that gathering areas near the mortuary, and on exterior decks of the building itself, offer fantastic views of the water.

"For the Haida, this is important, as they're a seafaring Nation," he says.

Hospital sets a new standard with HVAC and more

The Northern Health Authority worked closely with BC Hydro in the design of the new building, which was actually built around the back of the old hospital buildings because the location of the site is ideal. Northern Health used BC Hydro's New Construction program to help analyze a series of energy management options which ultimately led to a design with a highly efficient heating, ventilation and air condition system, plus a higher-performance building envelope that includes improved wall and roof insulation, glazing. These enhancements, along with low-flow water fixtures and an efficient lighting system, not only save money, but improve the comfort of patients and staff alike. Lighting was improved through design, LED luminaires and controls, including motion-activated lighting in many areas. The building has no opening windows, as Kallos says Northern Health has learned that opening windows are not optimal due to energy, operational and security concerns.

Kallos says energy efficiency is popular with residents of Haida Gwaii, as the remote area is not linked to the main BC Hydro grid and its largely clean, renewable power. Electricity generation on Haida Gwaii comes primarily from a diesel-powered facility. Propane supplements the diesel power at the hospital, helping power the kitchen and also the laundry facility, which also handles all laundry from the Haida Gwaii's other hospital, at Masset.

In addition to saving an estimated $19,000 a year in energy costs (compared to a similar building without energy-efficient components), the hospital also figures to trim CO2 emissions by 27 tonnes annually.

"Northern Health benefits from a really strong relationship with BC Hydro," says Mike Hoeffer, Regional Director of Capital Planning and Support Services with Northern Health. "BC Hydro has supported us through our participation in their programs that allow us to do more with what we've got, and to explore the options where appropriate – retrofitting or building new – in the best possible way."

Collaboration with BC Hydro on this project started in 2013.

As Northern Health strives to earn the final points necessary to deliver on LEED Gold status, they've included such sustainability features as a bike storage area and an electric vehicle charging station. Kallos is looking forward to the island's first electric vehicle, and laughingly suggests that it would be nice to be recognized for some LEED points because several staff kayak to work from nearby islands.

"You don't get credit for people paddling to work, which you should," he says. "That should be five points!" 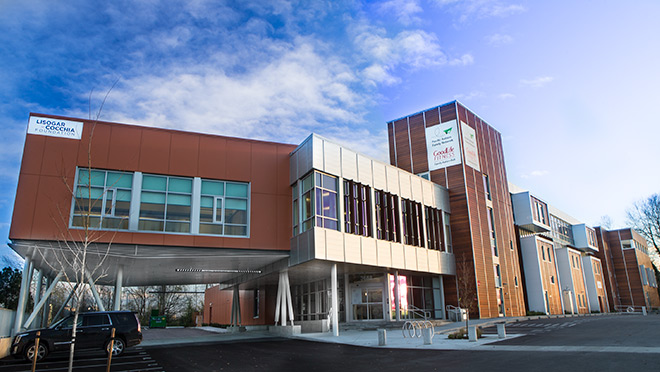 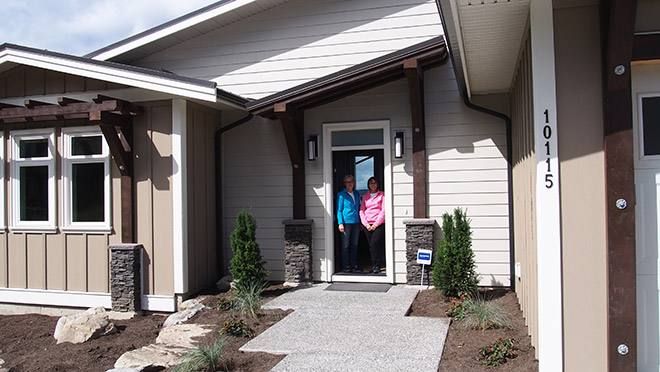 After teaming up with Ladysmith-based GNB Builders, a pair of transplanted Albertans moved into an ENERGY STAR® qualified new home last December, a four-bedroom home that features a 17-foot-long "endless pool", a huge, indoor, rainwater reservoir, and a design that suits their needs today and for decades to come. 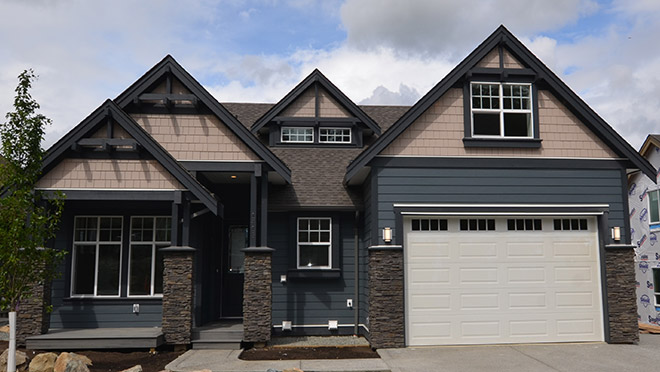 A Fraser Valley couple collaborates with builder Odessa Group to upgrade the efficiency of their subdivision home in Agassiz's Harrison Highlands.