Show caption The fire department building at Alert Bay has been equipped with solar panels on the roof.

Show caption The most challenging installation by Hakai Energy Solutions was on the curved roof of Alert Bay's public works building.

Show caption Alert Bay's municipal office gets the most attention in town, in part for its solar panels, and in part because a monitor in the office gives real-time and historical solar electricity generation data.

On the rainy central coast, a small town discovers power of the sun

The people of Alert Bay, B.C. have discovered that the rain and cool temperatures of B.C.'s central coast aren't barriers to solar power generation.

Photovoltaic panels now cover the roofs of five municipal buildings, and the locals can see just how much energy is being generated every time they visit the Village of Alert Bay's municipal office. Real-time and historical reporting of Alert Bay's solar generation is displayed on a monitor there.

"A lot of people question the output of a solar panel in an environment where we get more than our fair share of rain at times," says Jason Jackson. "Many people believe that panels may only work for three months [a year], and we know that's not true. On most days, including rainy days, the solar panels will continue to work."

Jackson is an energy systems designer with Hakai Energy Solutions, and he's been bombarded with questions about solar since Hakai installed Alert Bay's solar arrays, which are expected to provide enough electricity to cover most of their power needs for those five buildings. Combined with a switch to LED lighting on 23 oceanfront boardwalk lamp standards, the Village of about 440 people stands to trim its BC Hydro bills by about $10,000 a year.

The questions Jackson gets come from a range of locals, from tech-savvy kids to long-time residents who have been thinking about solar power since the 1960s. One of the cool facts Jackson likes to toss out is that high temperatures aren't a friend of solar power. When the sun's out in full force, it generates more energy on a winter day in Alert Bay than it does in the 40°C heat of Arizona.

Another fact that surprises: It's easy to connect a home's solar generation system to the BC Hydro grid.

"When the red tape was removed on the net metering program, that changed things immediately," he says. "When I tell people about the process, they're really surprised. They actually expect kind of an uphill battle. They don't even know if it's legal, and there's maybe an assumption that it's going to cost them a bunch or that there's extra permitting requirements.

"When we tell them how easy it is, they feel great. They're so impressed, and we are as well."

There are now more than 900 BC Hydro customers connected to the BC Hydro grid through the net metering program, a dramatic increase from 2014, when there were less than 400 with the ability to sell electricity back to BC Hydro.

Most fishing lodges and outposts on the central coast of B.C. rely on diesel power, but Alert Bay got connected to the B.C. grid in 1946, when the Village incorporated and an underwater cable was installed from Vancouver Island to Cormorant Island, where Alert Bay is located. It's a remote place, a 35-minute ferry from the Vancouver Island community of Port McNeill, which is 350 km north of Nanaimo.

Alert Bay's solar project was made possible by a grant from the Union of BC Municipalities Gas Tax Agreement Strategic Priorities Fund. But solar wasn't the original plan for that funding.

A wind turbine was initially planned, but was then abandoned because it couldn't be constructed at the required height – it would have to be too high to co-exist with the small island's airport. Solar turned out to be Plan B, at an equipment and installation cost – 100% covered by the Strategic Priorities Fund – of about $340,000.

The 79 kW of peak electrical output is generated by roof-top installations spread out over five sites, including the municipal office, fire hall, recycling facility and a net-loft on the government wharf. Hakai had to produce a couple custom installations, including panels attached to the curved roof of the culvert-like public works facility.

Alert Bay chief administrative officer Justin Beadle says the $5,000 estimate in annual energy savings from the solar power is a conservative figure. Since the solar arrays began operating three months ago, the winter-time generation levels have often exceeded expectations, and Beadle is excited about seeing increased generation in the spring and summer.

"I'm inclined to think that we're going to see far higher cost savings than what our conservative projections have shown," says Beadle.

Even if the solar power saves $5,000 and the LEDs another $5,000, those savings will be significant to a town that generates just $250,000 in annual municipal tax revenue.

Beadle says Alert Bay's solar project isn't just a proof of concept being watched closely by other communities in B.C. He's getting calls from all over the world, which is paying off in some valuable marketing for a place unknown to most and thirsty for economic development.

"It was sort of on a whim that we came up to Alert Bay one summer a few years ago," says the former Victoria resident, recalling his first trip there in 2013. "Five minutes off the boat and we loved it. We had to find a way to live here.

"Yesterday morning, I was sitting on the couch before work and it was just an orca parade past the front of our house. There were four or five groups of between probably five and six orca in each. And in addition to that we get the humpbacks, the minkes, the octopus and the sea lions. And two grizzly bears last year. It's a real cool place to be."

Location of the Hakai Field Station, an archaelogy and marine conservation research facility, is shown on this aerial view of Calvert Island. The operation used as much as 500 litres of diesel fuel per day until solar generation was installed and took over the lion's share of electricity generation in 2010. Photo by Keith Holmes.

A product of Prince George whose grandfather worked for BC Hydro, Jackson wound up working for Hakai after moving to Vancouver Island and then joining a pioneering quest to help the central coast wean itself off costly, carbon-emitting diesel.

For years, a settlement on stunning Calvert Island had been the site of an exclusive resort struggled financially in large part because of the enormous cost of powering lodging and other facilities with diesel. Then B.C. philanthropist Eric Peterson bought the land and buildings in 2009 to set up the Hakai Institute, a research facility (archaeology, marine conservation) adjacent to the islands' marine preserve.

"Exclusive reliance on diesel power wasn't acceptable to [Peterson]," says Jackson. "He understood the risks he was taking with the new technology, but he said 'Let's build something proper here, something innovative."

Up until 2010, the site burned as much as 500 litres of diesel fuel per day. By 2011, solar power had reduced the need for diesel to 100 litres or less, and what became known as Hakai Energy Solutions had a proof of concept they immediately pitched to other remote, off-grid locations along the coast.

Hakai's projects since include solar arrays at False Bay School on Lasqueti Island and Kitasoo Community School at Klemtu, which is located north of Bella Bella.

"There are diesel electric generators in every nook and cranny all the way down the coast, with barges of diesel being shipped up and down on a constant basis to keep these places running," he says. "We've helped people convert to solar on islands, including sportfishing facilities, where operating off grid with diesel can have enormous costs of hundreds, even thousands of dollars a day. We're really interested in those projects because they can be very challenging."

The big growth in recent years, has been in projects such as Alert Bay's that are tied to the electrical grid through BC Hydro's net metering program. And he expects to be involved in several residential projects in Alert Bay as a result of the municipal initiative.

"Everybody watches their energy bills and wants to do something about them," he says. "A lot of people here are well educated about the environment, and they want to participate in power generation."

Panel costs continue to drop, and systems are getting smarter

Helping enable the move to solar power is the ease of connecting to the grid and the steady drop in purchase price for solar panels. Jackson says that while panels come with a "typical product warranty" of 10 years, most carry a power production output warranty of 20 or 25 years. And he's confident that systems will last 30 years or more before requiring panel replacement.

It's also getting easier to monitor the degradation of panels over time, as there are new solar inverter systems that can monitor energy generation down to the individual panel. 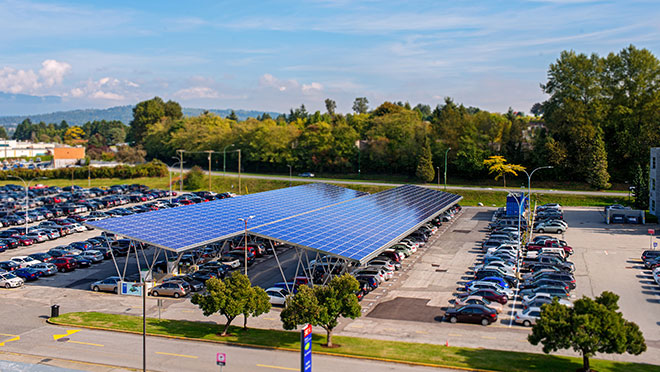 Installing solar panels is only one way you can generate your own electricity. And we'll buy any of that energy you don't use.