In a city that's full of tall residential towers, it's hard to stand out. But Vancouver's TELUS Garden certainly will.

At 53 storeys, it will be the second-tallest condo tower in the city. But it's the building's remarkable energy efficiency that will set it apart.

"This is a truly unconventional and innovative design," says BC Hydro engineer Salah Mahdi. "The heat from an existing TELUS data centre next door will be recovered and used to heat two towers: the 53-floor, 450,000 square-foot residential tower, and a 24-floor, 500,000 square-foot office tower that will be TELUS's new headquarters."

"That's a huge amount of space, but recycling the heat will virtually eliminate the need for any additional energy to heat both buildings."

Completed by Cobalt Engineering, the study consisted of a detailed simulation of how the two buildings will perform hour-by-hour, day or night, over a year, depending on which energy source is used and what energy-savings systems are installed. The modeling also looked at the impact of making slight changes in the buildings' mass and envelope.

The office tower will have in-slab radiant heating and cooling, while residential units will be heated with high-performance fan-assisted European-style perimeter radiators that respond quickly to temperature changes. The project also includes a three-level retail podium and a public plaza.

BC Hydro estimates that, collectively, the TELUS Garden energy-conservation measures will result in buildings that use about 22 per cent less energy than conventional buildings.

"They are also going to be really unique," says Mahdi. "The development will be a showcase of how to successfully share energy and at the same time build a unique and beautiful space." 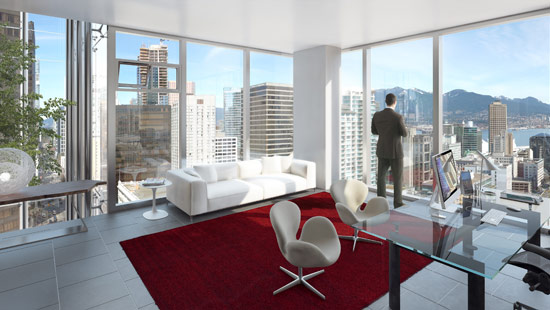 BC Hydro's New Construction Program covers up to 100% of an energy-modeling study done by an approved consultant. The model can be used to apply for LEED certification and, in some cases, for FortisBC incentives, as well as incentives offered by BC Hydro for installing energy-saving measures."

"The New Construction Program has helped Westbank as a company become educated on sustainable design and efficient energy options," says Ian Gillespie, a principal with Westbank Projects, the co-developer of TELUS Garden. "It also helped us develop mechanical and electrical systems that have pushed the envelope and promoted more efficient use."

When the 428 units in the residential tower went on sale in March 2012, they sold out in just over one week. Andrea Goertz, senior vice president with TELUS, credits the project's innovative design.

"We knew from the very beginning that TELUS Garden would be unlike any other development, setting the highest standards for intelligent and green living," she says.

The office tower within the development is being targeted to LEED Platinum certification based on the revised 2009 standards, unprecedented in North America.

Westbank and TELUS also stand to receive a major return on their investment in energy-saving measures, once the buildings are complete and all the measures are installed.

Through the New Construction Program, BC Hydro's incentives for major projects such as TELUS Garden are between $30,000 and $50,000 per 100,000 kWh per year of electricity saved. The better the electricity savings achieved compared to conventional building design, the higher the incentive BC Hydro will provide.

"As a company, we truly believe that sustainability will be incorporated into all aspect of design in the future, whether it is directly related to energy savings or associated with densification, green living features or intelligent envelope systems," says Westbank's Ian Gillespie. "The New Construction Program assists us in achieving the goal of building the most sustainable buildings in the world."

Find out more about energy modeling and BC Hydro's New Construction Program or contact your Key Account Manager.