Trapped in pools cut off from the main channel of the Puntledge River near Courtenay, 227 small fish were rescued by crews from BC Hydro and Mainstream Biological Consulting as the extended warm, dry summer extended through September.

The fish rescue is a reminder of the challenges BC Hydro faces in ensuring the survival of fish stocks while also maintaining reservoir levels and river flows around the province.

For about 45 days, BC Hydro maintained minimum flow requirements for migrating and spawning salmon by releasing about triple the amount of water into the Puntledge than what was flowing into  the Comox Lake Reservoir.

But with the reservoir dropping six centimetres per day, BC Hydro was forced to conserve some of the water until the fall rain arrived. And that posed a problem for smaller fish.

“When we reduce the river flows, the river moves a little more into the middle,” recalls Stephen Watson,  a BC Hydro stakeholder engagement advisor who has been involved within the Vancouver Island operations team for over 12 years.  “This creates some areas where pools separate from the main channel, and this is where the fish get isolated.”

Part one of the fish rescue operation is the gradual reduction of flows to minimize the number of stranded fish. Following specific instructions, BC Hydro made many small flow adjustments with gates in the Comox dam throughout the night and early morning.

Part two was the actual rescue.

Working in two-person crews, BC Hydro and Mainstream Biological Consulting spent about six hours salvaging fish at various areas along the Puntledge as the river flows slowly decreased.
Fish were captured using an electrofisher, which helps draw the fish out of crevices and stuns them to make them easier to catch. They were then scooped up with a net and placed in a bucket before being released into the river.

The majority of the fish retrieved from the water pools were juvenile coho and Chinook, but there were also some lamprey, stickleback, rainbow trout and sculpin.

“No adult, or spawning salmon were recovered, as flows were reduced overnight and very slowly and adults hold in deeper water,” said Chris Beers, the natural resource specialist onsite during the fish salvage. “It’s more common for juveniles to hang out towards the river edges given the water velocities are slower.” 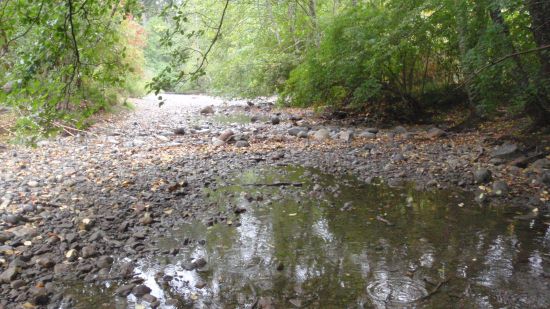 The number of stranded fish could have been far higher. But careful planning in consultation with local officials and fish agencies reduced the flow reduction impacts.

“In this instance, with the dry weather, I suggested going below the minimum discharge to conserve water,” recalls Peter McCann, an operational planning engineer with BC Hydro.

Part of McCann’s job is to look at reservoir levels and forecasts before modeling different scenarios and making recommendations on flow rates. He then requests “variances”, which are changes to BC Hydro’s water license and required river discharges, when needed from the Comptroller of Water Rights (CWR).

McCann made the call only after discussing timing and other issues with Watson, BC Hydro natural resource specialist Eva Wichmann, and representatives of the Department of Fisheries and Oceans and the Ministry of Forests, Land and Natural Resource Operations.

“This is another great example of how we work with local officials to ensure that the footprint of our operations is kept to a minimum,” said Watson. “Everyone working on the salvage did their usual diligent job in identifying and relocating the fish in a timely manner.”

Fisheries and Oceans Canada issued a fishing closure on Thursday, September 27 until October 31 for the Courtenay and Puntledge rivers due to low river levels and stress on salmon. The Regional District also applied Stage 2 water restrictions.

With the rains finally hitting the watershed on October 13, the extended dry period was managed as well as possible.