Manufacturer cuts heating costs in half during thermostat test

Sometimes the right idea and the right opportunity come together at just the right time. That's what happened when manufacturer Gillingham Cabinets decided to take a look at what could be done to bring down heating costs at their production and showroom facility in Duncan.

"I discovered Ecobee because I was looking for a way to control my home thermostat from my iPhone," says Duncan Wilcock, who was Gillingham Cabinet's technical and marketing manager at 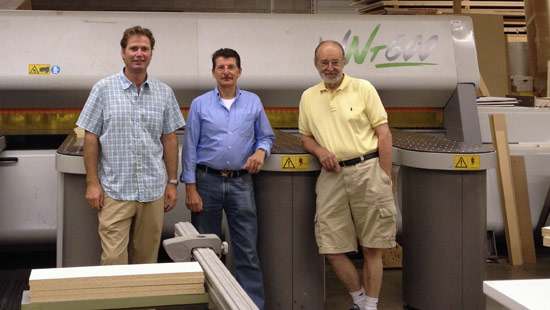 The company already had a "green focus," says Wilcock, and has cut its carbon footprint in half over the past few years. "I thought about how the thermostats at work were all manually controlled, so this might make a lot of sense."

Ecobee is a Canadian-based manufacturer of programmable thermostats that are wi-fi enabled so they can be monitored and controlled from anywhere via the internet. The web portal retains historic temperature and usage data and provides daily tracking of energy use, allowing a user to gain better understanding of when and why heating systems are on.

It's a new technology that BC Hydro has been testing — through its Conservation Technology Innovation program — to determine what type of conservation gains it might offer. Which is where a bit of luck and timing came in.

"I Googled Ecobee and BC Hydro, and the next thing I know, I found out that BC Hydro was looking for people to test this product," says Wilcock.

So Gillingham Cabinets partnered with BC Hydro on a five-month pilot to implement the automated thermostats. The results were impressive.

Savings target of 20% more than doubled

The company installed three Ecobee thermostats in the three different temperature zones in its 7,500 square foot facility: showroom, workshop, and lunchroom. With the internet access and the system's graphic displays, Wilcock was able to adjust the heating program daily as he learned the building's patterns.

At the end of five months, Gillingham was saving 55% on heating costs compared to one year earlier — far surpassing a project goal of 20% savings. Wilcock chalks the results up to changing four key behaviours:

After five months, "we almost tripled our targets," says Wilcock. "We were thrilled." The project is projected to save $3,000 in heating costs over a year, giving a payback of 0.7 years.

"That's dollars in the pocket — it's an overhead cost that they're no longer spending, in other words that's pure profit," says Wilcock.

It's profit that other companies could also aim to capture, says Irfan Rehmanji, BC Hydro technology innovation manager for the commercial sector. "Even though Gillingham Cabinets is an industrial company, their results would be applicable to a broad range of commercial businesses too," he says.

As part of the trial with BC Hydro, Gillingham Cabinets also tested units called "Modlets," which allow a user to program their electrical outlets — such as those serving a lamp, printer, and desk space heater — to turn off automatically. They also allow usage monitoring via internet, letting a user fine tune the program over time.

"The Modlets worked really well there, because space heaters sometimes get left on overnight, and this way you know that they're off," says Wilcock. "In fact, you can make things more comfortable by turning them on half an hour before people get in."

Wilcock found the Modlet controls led to a 44% savings in electricity.

Gillingham Cabinets had already been working to reduce its carbon footprint. A bonus effect of the energy technology test was an additional reduction in greenhouse gas emissions of 7%.

"All in all we're pretty pleased with these results," he wrote. "Maybe even a little proud."

Read blog posts before and after Gillingham Cabinet's technology test.