Energy Challenge: Families cut energy use by more than 80% 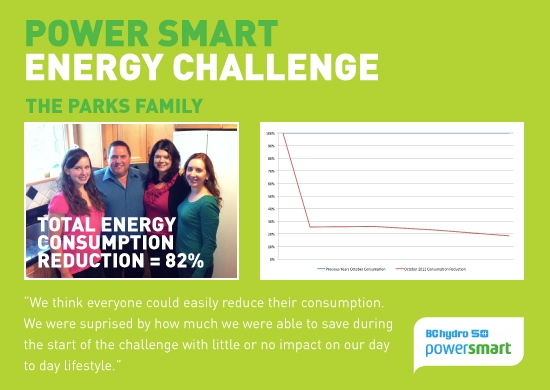 Parks family of Coquitlam wins the big prize, by 1 per cent

“I couldn’t believe what our consumption was; it’s been a wake-up call,” said Power Smart Energy Challenge contestant Toby Jones.

Deborah Parks, the Jones’ competitor, agreed. “Seeing the chart of our average consumption was shocking.”

The Power Smart Energy Challenge has come to a close, with Coquitlam's Parks family taking home the grand prize, a $6,000 home entertainment system, including a 46-inch ENERGY STAR® LED TV.

The Parks' managed to reduce their overall consumption by 82 per cent over the contest in October, just one per cent more than the Jones', who live in North Vancouver.

“Cutting your consumption by more than 80 per cent is no small feat. I think the Jones’ and the Parks’ commitment will have inspired other families to take a second look at how they use their energy and make some changes of their own,” said Power Smart engineer Greg Morandini, who coached the Jones family during the one-month challenge.

The Parks’ coach, Power Smart engineer Tony Mauro, echoed these sentiments. “The biggest barrier to change is often not the changes themselves but understanding how behaviours and activities affect consumption. The contest reinforced that having the tools and information at hand – the graphs and numbers showing your actual consumption – made it easy to make conservation a priority.”

The Power Smart Energy Challenge helped demonstrate how data collected by smart meters, which are being installed across B.C., will enable residents and businesses to more closely track their energy use. By accessing a password-protected BC Hydro account online, BC Hydro customers will have electricity use data and insight that — like the Jones' and Parks' — will enable them to make proactive steps to reducing their energy bills. 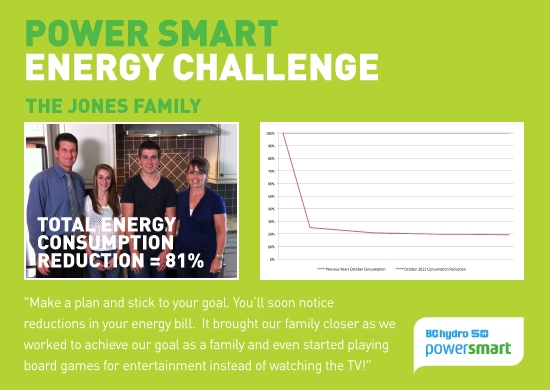 Families believe they can maintain reductions

Both the Jones’ and the Parks’ agreed that none of the behaviour shifts were really that hard. In fact, they all thought that it got easier through educating themselves about what consumes energy and what they can do differently.

“I think everyone can do better in their own ways. There’s so much technology in our lives that we can take another look at,” said Toby Jones.

“It will be hard not to be more conscious of the energy we use going forward. These patterns and behaviours have been implemented into our routines,” said Deborah Parks. “Some appliances may not go back on at all and when it comes time to buy new appliance we’ll be buying efficient ones.”

Consumption was out of control

When the contest started, the Parks’ had been consuming 41 kilowatt hours per day, based on a daily average for the last three Octobers. The Jones’ weren’t faring any better, consuming an average of 47 kilowatt hours.

In an initial interview Deborah had commented that she didn’t think her family could reduce their consumption by 70 per cent, but both families managed to meet that decrease within the first week of the contest.

The Parks’ were surprised at how quickly their behaviours changed and the energy efficient practices became habits. “We went from thinking, ‘I gotta remember to turn that light off,’ to asking ourselves, ‘do we even need the light on,’” said David Parks.

He felt that being provided with the usage information at a more frequent and granular (daily and hourly) level helped them understand their usage and make changes. “Seeing the spike on the smart meter really prompted us to change our behaviour and hand-wash that dish instead of turning on the dishwasher, because you can see the savings right away.”

While many may think that the kids were the weak links in this competition, in both families the kids were just as dedicated as their parents.

On Team Jones, it was actually Rachel who pushed the family to enter the contest in the first place. “I told all my friends about the contest and they think it’s pretty cool and that it must be hard. But once you get used to it, it’s easy.”

The Parks girls, Jaclyn and Jennifer, have been sacrificing their beauty regimens by going to school with wet hair so as to avoid using their hairdryers.  And they’ve even been studying at the library to avoid turning on extra lights at home.

“Being part of this contest really brought us together and helped us to communicate better,” said Karen Jones. “Working together to make a goal and a game plan ensured that our behaviours did change.”

Working together as a cohesive unit was a key driver of success. All it takes is one person who isn’t making conservation a priority for the whole team to crumble.

“We’ve been lucky to have this chance to look at our energy usage and to have the whole family learn about it. I used to joke that I’d come home and have to walk around turning off all the lights, and now everyone is thinking about it,” said David.