BC Hydro’s clean, reliable electricity has powered our province’s homes and businesses and helped our economy grow for close to 50 years. As we look back on that legacy, we must also look ahead and plan for the future by reinvesting in the infrastructure required to supply clean electricity to our customers.

These capital investments mean we need to raise our rates, and on Tuesday we filed with the British Columbia Utilities Commission (BCUC) our formal request to do so in a revenue requirements application [PDF, 29.9 MB].

We are mindful that any rate increase can be financially challenging for our customers, especially those who are on fixed incomes, and this increase is not one that we take lightly. That’s why we want to take this opportunity to explain the difficult decisions that go into striking the right balance between managing rate increases with the need to reinvest in our electricity system.

We also want to tell you how we’re managing our own costs and working hard to make sure we spend our customers’ money wisely. I invite you to read on to learn more about our plans to keep B.C. powered for the future and why your electricity rate is changing.

As we have said publicly on numerous occasions in the past several months, we are seeking rate increases of 9.73 per cent for each of fiscal years 2012, 2013 and 2014 (cumulatively 32 per cent over the three years) – a monthly increase of approximately $7 to the average monthly residential bill for each of the next three years.

The most significant cost factor driving rate increases is our ongoing capital investment program as we continue a regeneration phase at BC Hydro. Our dams, generating stations and transmission lines were built primarily between 1950 and 1980, and many of these assets are nearing their end of life.

Over the next three years, we will invest on behalf of British Columbians about $6 billion to upgrade and expand capital infrastructure province-wide to maintain a safe, reliable supply of clean electricity. 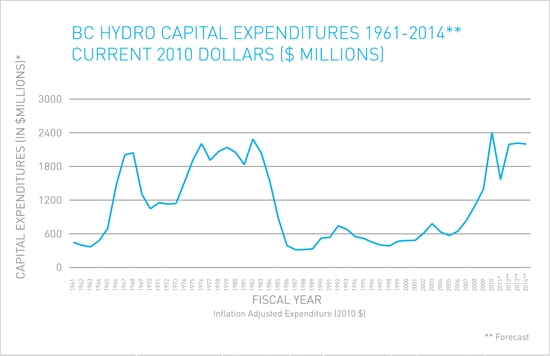 Investment is in customers' long-term interest

While it might be easier from a public relations perspective to put off these projects, and ask for a more modest rate increase, this would not be in the long-term interest of our customers or British Columbians generally.

It would cost British Columbians more in the future if we neglect these assets now when you consider the risk of power outages and the risks to public and employee safety, not to mention the cost of corrective maintenance and emergency repairs. Delaying these projects into the future will not make the need to invest in our electricity system go away.

In the interest of fiscal prudency, we have prioritized our capital projects and capped our total capital expenditures to about $2 billion a year. We are proceeding only with the most important projects at this time.

In addition to necessary upgrades to large assets, such as the 80 year-old Ruskin dam and powerhouse, there are a number of system-wide upgrades that are necessary. For example:

In addition to replacing aging components of the electrical system, BC Hydro is working on new generation and transmission projects and investing in conservation to be ready to meet future energy demand – given that B.C.’s population is expected to grow by more than one million people over the next 20 years. 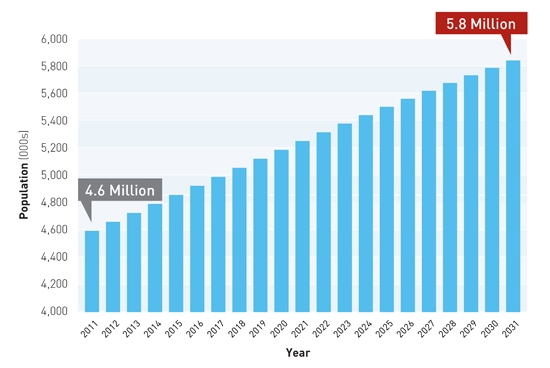 BC Hydro is a cost-of-service utility, and our rates are set to allow us to recover the cost of providing service. We are regulated by the independent British Columbia Utilities Commission (BCUC) and we must apply to the BCUC through a detailed revenue requirements application to ensure our rates are set appropriately.

Our revenue requirement application filed Tuesday with the BCUC totals more than 1,500 pages, and outlines our capital expenditures for the next three years as well as our financial assumptions, revenue and load forecasts, and operating costs.

The public, quasi-judicial regulatory review process with the BCUC is very transparent, and is expected to take close to a year for a  a decision, with intervenors having an opportunity to question and understand our cost structure and our revenue requirements. An oral hearing is expected to take place in the fall.

In the revenue requirements application, we are asking for approval for rate increases for the next three years because we can plan projects and programs and predict revenues and costs over a three-year period with some certainty, in keeping with our three-year service plan.

The filing, however, includes a five-year forecast rate increase (as seen below) in the interest of being transparent with our customers about our long-term plans,  even though forecasts beyond three years are highly likely to change.

Why BC Hydro’s rates forecasts change

BC Hydro’s rates for fiscal 2011 were established via an agreement negotiated with customer groups and other representatives and approved by the BCUC in December, 2010. In that agreement, the rate increase forecast for the next three years ranged between 5 per cent and 16 per cent.

We continuously revise and update our rates forecast to take into account new information, such as a change in trade income or water levels.

In addition, we adjust our rates to try and ease the impact on our customers as much as possible. In this case, the Province of B.C. recently took measures to lower the rate increases, involving changes to water rentals and BC Hydro’s return on equity.

BC Hydro has also smoothed the rate increases for fiscal years 2012, 2013 and 2014, so that they would be spread more evenly over the three years to reduce the year-by-year volatility.

BC Hydro is committed to operating efficiently

We are making every effort to constrain our own costs while preserving our ability to deliver safe, reliable service. Under the cost-recovery model of a regulated utility, any cost savings we achieve go directly to lower rates.

We’re continuously looking for operational cost savings that we can pass on to our customers by operating more efficiently. For example, the integration of the British Columbia Transmission Corporation and BC Hydro in fiscal 2011 will deliver about $25 million annual operating cost savings beginning in fiscal 2012.

BC Hydro is also focused on reducing costs related to administrative and support services across the company; managing total headcount to ensure resources are shifted to priority operations with an emphasis on the safety and reliability of the system; and seeking efficiencies to offset cost pressures arising from the need to ensure public and employee safety, maintain reliability, and take into account growth in customer demand and inflation.

B.C.’s rates will remain among the lowest in North America

We know that any rate increase is a challenge to understand and accept and we will keep up our work to keep British Columbians informed on what we are doing and why we are doing it now. To keep things in perspective, even with the proposed increases in rates, our electricity prices will remain among the lowest in all of North America.

As a customer, you can help lower the bill impact of rate increases by taking action to conserve and manage your electricity use efficiently.

BC Hydro’s Power Smart programs help to create energy-efficient homes, schools and communities with programs tailored to meet the needs of public-sector, business and residential customers, including those on fixed incomes.

The Province’s LiveSmart BC program helps British Columbians make green choices that save money at home and at work through energy-efficiency advice, equipment and incentives.

We owe our competitive rates to previous generations who had the foresight to build transmission lines across the rugged frontier of British Columbia, and facilities like the W.A.C. Bennett Dam and the Williston Reservoir that continue to provide us with clean, cost-effective electricity 50 years after their construction.

As custodians of this great legacy, on behalf of all British Columbians, BC Hydro is committed to ensuring responsible reinvestments in conservation, generation, transmission and distribution programs and projects keep B.C.’s homes and businesses reliably powered for another 50 years

Dave Cobb is BC Hydro President and CEO

*Customers received a credit for the last three months of fiscal 2011 as a result of a negotiated settlement agreement that established BC Hydro’s rates for the current fiscal year that ends March 31, 2011.
**The rate rider is applied to the total of all charges, before taxes and levies. Amounts received from the rate rider will be used only to pay down BC Hydro's Deferral Accounts. BC Hydro uses these accounts to record unexpected costs and prevent sudden rate fluctuations that could result, for example, from higher-than-forecast market prices for energy.
***The net annual bill impact for fiscal 2012 is bigger than the 9.73 rate increase for fiscal 2012 because of the one-time customer credit for fiscal 2011 that reduced bils in January-March 2011.

Ruskin Dam and Powerhouse Upgrade to cost about $800 million