Electricity is the backbone of a modern society. Yet, we can't see it and we largely take it for granted, except if it should go out or perhaps when we pay our BC Hydro bill.

At BC Hydro, we know how important having reliable, affordable electricity is to you and your family. That's why BC Hydro is focused on continuing to build for future generations in a responsible and cost-sensitive manner. We also believe it's important that we keep you informed about what factors are determining the cost of electricity – both now and in the future.

Even with recent increases in rates, BC Hydro's electricity prices remain among the lowest in all of North America. We are committed to maintaining that competitive advantage by keeping our own operating costs low and helping customers use electricity more efficiently through our Power Smart programs.

Last December, the British Columbia Utilities Commission (BCUC) approved changes to BC Hydro's rates and rate rider that had a net bill impact in the current fiscal year (April 1, 2010 to Mar. 31, 2011) of 7.29 per cent.

At the same time we were able to provide customers an update on future rate changes which are forecasted as increases of approximately 9.7 per cent for each of the next three years – fiscal 2012, 2013 and 2014 – and around 7 per cent in fiscal 2015. In percentage terms, including the current fiscal year, this represents a cumulative increase over five years of 52 per cent if approved by the BCUC.

In dollar terms, for the average customer, this increase amounts to a $7 monthly bill increase each year for the next three years. Consumers can reduce this impact by taking action to manage their electricity use and BC Hydro offers a range of Power Smart programs tailored to meet the needs of residential and business customers.

For more information on how to cut consumption and save money, we're encouraging customers to visit our Power Smart pages on bchydro.com.

Later this year we will be filing our next Revenue Requirements Application, which will detail these rate changes as well as the much-needed investments in our system that will ensure we can meet not only current but also future energy demand. The application will be submitted to the independent BC Utilities Commission for a thorough review and approval process.

Investments for a safe, reliable supply of power

With all of these numbers being talked about, it's important to understand how we set rates, and where that money is spent. BC Hydro is a cost-recovery utility which means that we first determine what it will cost us to deliver electricity to our customers and then determine if our current rates are sufficient to cover all of our costs.

Rates have been rising over the past five years in large part because we need to build new systems to meet increasing demand and renew or replace aging generating, transmission and distribution facilities that were primarily built in the 1950s, 60s, and 70s. All of this work is essential to keeping the BC Hydro system safe, reliable, and able to meet the needs of future generations of British Columbians.

We know, for example, that in order to continue to provide reliable and clean electricity, we must now move into a significant building phase. Our province's population is growing and technologies are advancing every day. It adds up to an increase in overall demand for power. To meet these new demands we need to keep upgrading our system, and this in turn increases rates.

To show you how recent and significant these re-investments are to BC Hydro, take a look at the chart below. It shows the trend in renewing and building new infrastructure since 1990. Look especially at the last couple of years and forward to 2013. You can see that our investment in new infrastructure has almost quadrupled since 2005. 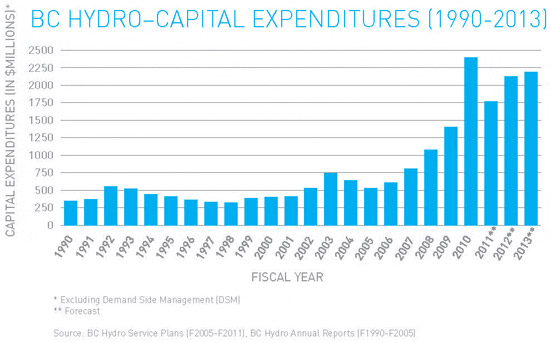 Amortization and finance charges – which pay for these capital projects – are what accounts for the bulk of the added costs that we eventually pass on to customers and is the largest component of future rate increases.

Keeping rates among the lowest in North America

Even with these rate increases BC Hydro is committed to remaining one of the lowest-priced utilities in North America. Both the Province and BC Hydro are taking steps to reduce costs and make operations more efficient.

We will be offering customers new tools to manage their own energy use. We are also offering programs to help offset rate increases such as the Energy Conservation Assistance Program for low-income BC Hydro customers to help with home energy evaluations and retro-fits.

Investing today in our BC Hydro assets will have real and tangible benefits for British Columbia: improved system reliability, new economic opportunities for families, companies and industries, and the assurance that we are responsibly planning for the electricity needs of future generations while keeping rates affordable.