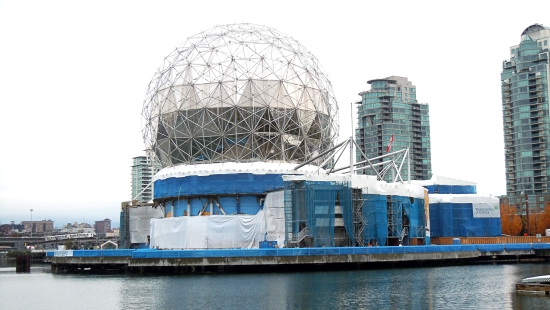 Science World is getting an energy-efficiency upgrade that showcases innovation – and BC Hydro is pleased to be very much involved.

BC Hydro is working with Science World on needs assessments and financial incentives for specific efficiency upgrades at the South False Creek facility. The partners are also teaming up on educational outreach initiatives.

Bryan Tisdall, President and CEO of Science World, shared an impressive list of energy upgrades that are part of the facility's extensive renewal project, including:

Tisdall also noted plans to engage Science World's visitors in conservation efforts, particularly during the BC Government-initiated Year of Science that runs through June 2011.

"[The Year of Science] is a partnership with stakeholders throughout the B.C. science community to increase awareness and interest in the importance of science and to understand the issues facing B.C. in developing science capacity," said Tisdall. "Science World has a legacy of science leadership in B.C. and we're pleased to engage in further activities to increase awareness around key science issues, including energy and conservation."

As part of the Year of Science, Science World is also bringing its live science shows beyond the walls of the beautiful dome. Science World's "On the Road" tour, which will include a focus on energy options and conservation, will engage schools throughout the province, providing teacher resources as well as community science celebrations to engage the communities.

"BC Hydro has provided the necessary support and tools to help Science World monitor progress and improvements in energy conservation," Van Ruyven stated. "Metering equipment and software will help turn the data into decision-making information on how to become even more energy-efficient. This information will obviously flow through to the public."

The partnership between BC Hydro and Science World is a success story that just keeps going.

Linda Mott is a program manager with BC Hydro commercial marketing.