Jennifer Laroque of North Delta (left) is one of five British Columbians to recently join Team Power Smart and win tickets to the 2010 Winter Games.

Jennifer Laroque has a healthy respect for the environment, a new front load washer and dryer to help her save energy and money, and a couple tickets to the 2010 Winter Games to show for her commitment to Team Power Smart.

The North Delta mom is one of five recent winners of the Team Power Smart 2010 Winter Games ticket contest, which continues through December and January with a chance to win tickets to events including the gold medal men's ice hockey final. British Columbians can qualify for the monthly draw by joining Team Power Smart, and existing Team members can ensure they're in the monthly draw by logging into their online account each month.

Other recent winners include Dan Cook of Vernon, Lee-Ann Pickett of Prince George, Diane Halkett of Surrey and Alison Zheng of Burnaby.

"[Team Power Smart] gives you the answers and great ideas online," said Laroque, who joined the Team after talking to BC Hydro Outreach reps while hiking at Sun Peaks Resort near Kamloops. "It also gives me a way to set a good example for my children."

Laroque doesn't know how much electricity she has saved so far, but she has already applied weather stripping, sealed the windows and insulated the new roof of her Delta waterfront home. The family turns computers and lights off regularly, relies on natural light through the windows, keeps the heat low and often hangs clothes to dry.

Laroque, who had already bought 2010 tickets to aerial skiing and women's slalom skiing events,  will learn later on exactly which tickets she has won through the contest. She sees a parallel between the goal-setting of Olympians and Team Power Smart members, and she likes the Games for what they teach kids about focus, determination and sacrifice.

Surrey woman on her way to reward?

Since joining Team Power Smart in June, Diane Halkett has leaned on bchydro.com for ideas about saving electricity. And so far, it has paid off with a 10% reduction in her electricity consumption that, if sustained over 12 months, could qualify her for a reward.

The reward is a new Team Power Smart initiative that's only available to account holders who join Team Power Smart, make the commitment to save 10% and have at least a year of consumption history to compare against. If they can meet that 10% reduction over a full 12 months, they get a reward cheque from Team Power Smart.

Halkett, a student services administrator who actively promotes environmentalism to kids, figures she must "walk the talk." She now routinely unplugs unused devices around the house, including her coffee maker, kettle and computer, washes her clothes in cold water and hangs them to dry. And in preparation for this winter, she has re-caulked her house and commited to lowering the thermostat.

She's excited about winning tickets to the 2010 Winter Games, and has fond memories of the excitement in Montreal when she was living downtown in that city for the 1976 Summer Olympics.

Vernon's Dan Cook joined Team Power Smart in August and immediately began paying more attention to the way he uses energy. Not only did he switch off the heat in his hot tub for extended periods, he adopted a more efficient cooking strategy that relies in part on the microwave, crock pot and toaster oven.

Cook also turns his thermostat down to 15 at night, and plans to soon switch his incandescent lights to appropriate Energy Star-approved lights, including CFLs.

"Start reductions with major energy users in the household such as heating, the oven, the dryer and hot water," said Cook, who volunteered as a race offical at the 2010 Paralympic Winter Games. "Think of ways to use them less. Then work your way down to less energy-demanding items." 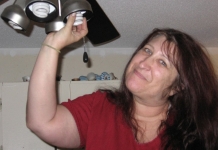 Near misses, and a win

Lee-Ann Pickett of Prince George is glad to be going to the 2010 Winter Games as a Team Power Smart contest winner. Perhaps it will even take the sting out of just missing seeing the 1980 Games in Moscow and the 1984 Games in Los Angeles.

"I guess the third time is a charm!," said Pickett, whose favourite energy-saving tip is to turn down the heat and put on a sweater.

Like so many of us, Alison Zheng's first conservation tips came from her mother.

"I learned a lot my energy saving ways from my mother - she always hung our clothes to dry as it kept our clothes looking newer, longer," said Zheng, who won 2010 Winter Games tickets after joining Team Power Smart at Burnaby's Deer Lake Summer Festival.

Zheng says she has already noticed a decrease in her BC Hydro bill, and is considering switching her major appliances to Energy Star-rated options.

You might say Sanja Sladojevic is one of Team Power Smart's biggest fans. Not only did she join the Team at a Vancouver Whitecaps game, but she's a big promoter of using bchydro.com's Green Guides for ideas about how to decrease your electricity use.

“I think the BC Hydro website is amazing," she said. "There are so many great tips and stories on there, there is something for everyone, and I think that is a great place to start.”

Sladojevic says her BC Hydro bill has started to fall. And while one reason is that she turns the heat down when the house is empty and overnight, she has not felt any sacrifice in comfort.