BC Hydro estimates that there are currently more than 300,000 older, inefficient secondary refrigerators in homes across B.C.  Is it any surprise that at least one of them dates back to the 1930s, and that there are some bizarre models in the mix?

The BC Hydro Refrigerator Relics Contest allowed customers to upload or mail in pictures and stories of their working yet inefficient spare refrigerators. Up for grabs was a chance to win a new Energy Star Appliance prize courtesy of Whirlpool and valued at $1,500.

“We received some amazing pictures and stories from across the province, said BC Hydro’s Oscar Ceron. “Our oldest fridge was found in Surrey and our most unique relic winner was located in Powell River.

Why BC Hydro pays for fridges

Since 2002, BC Hydro has collected over 190,000 inefficient refrigerators from customers.

“To put that in perspective these customers have saved enough electricity to power all the streetlights on Vancouver Island for over four years,” said Ceron.

The BC Hydro Fridge Buy Back program is quick, easy and can save customers up to $100 per year on energy bills.

If you have a fridge that measures between 10 and 24 cubic feet and is still in working condition, BC Hydro will pick it up, recycle it and give you $30 for it. Find out more on bchydro.com’s Refrigerator Buy Back Program page.

Surrey’s Geoff Gontier won the oldest fridge category when he produced a 1930s-era Frigidaire Moraine model (the temperature control is shown in the photo to the right). It was manufactured in a factory in Moraine City, Ohio that opened in 1926 then temporarily halted production as work turned to the production of various military items during World War II.

The unique relic category winner (in photo, below) , from Powell River, was a turquoise 1957 GE Refrigerator complete with rotating lazy susan shelves and two interior pillars of light. 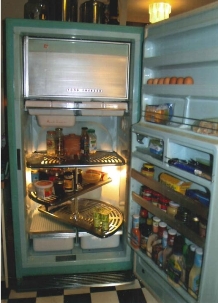 Of the estimated 300,000 older, secondary fridges in B.C., many find their way into basements and garages and are often the highest electricity-consuming appliances in a home as they run 24/7 and cost considerably more to operate than energy-efficient Energy Star models.

Where old B.C. fridges go to die, and are reborn